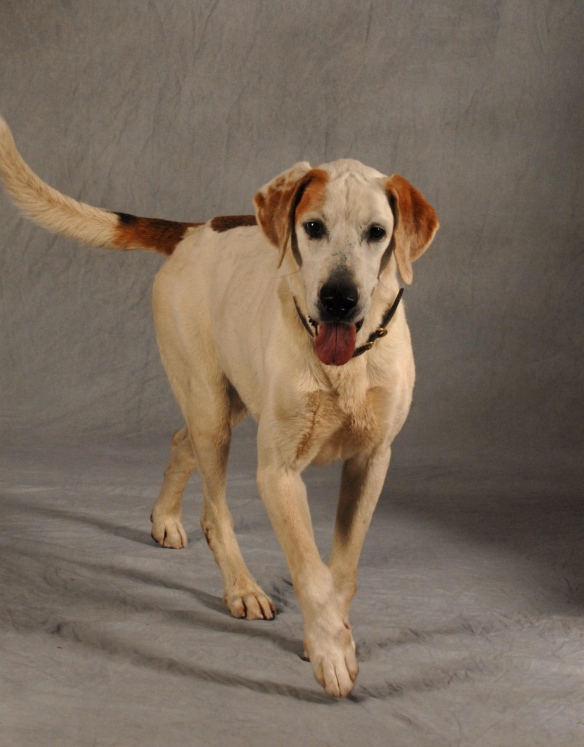 Harlequin, a nine-year-old son of Shamrock Xray '96 and Bicester Harmony '97, as captured by Peggy Maness of Maness Photography

THEY call Harlequin “the boomerang.” Two times Iroquois drafted him out to another hunt, and two times he came back. How lucky that turned out to be for us!

“He was a difficult puppy. He didn’t respond to authority well,” is how Iroquois huntsman Lilla Mason puts it.

But the boy sure turned out to be a good hunting hound. When Iroquois got him back the second time, MFH Jerry Miller decided it might be best to try neutering Harlequin, and that helped. So did the passage of time.

“As with a lot of hounds, I think he was just immature,” Lilla says, “and as he hunted more, he matured and became a really good hound.”

One creative training strategy Jerry used to correct Harlequin whenever he was errant was to leave him home from a hunt when Harlequin misbehaved.

“He was frustrated when he saw his pack mates leaving to hunt, and he would straighten up very quickly in order to be invited back out hunting next time,” Lilla recalls. “Hounds really do understand when everyone goes out to hunt. They know the pattern of a hunt day: you get drawn out, you get your tracking collar put on, you get loaded into the hound trailer. They know what all that means, and they know they’re missing it when they’re left behind. They realize that they’re part of the pack, and I think they get humbled. The cockiness that made them errant is dashed in the disappointment of not being invited to participate.”

This year, when they open the kennel gate at Iroquois to load the hounds up for the first meet, Harlequin will stay behind. He’s the newest member of the shuffleboard-and-golf set, living out the remainder of his days with his new pack, the Iroquois retired hounds. He can rest on his laurels now, and there are plenty of those. Despite his rebellious beginings, this good-looking young tough with those jaunty spots–a sort of Rebel with Four Paws–became a leader of the pack.

“I can tell you he was a good leader,” Lilla says. And I’ll turn the mike over to Lilla to tell you how, because she tells the tale better than anyone, having seen it first hand:

“One time hounds were in a covert in Possum Hollow, and it had been a blank day up to that point, dry and hot, one of those days in the drought. It seemed hopeless. But we got in Possum Hollow, and one hound spoke, then two hounds spoke, and then they just erupted. At the very west end of Possum Hollow, out popped a coyote. There just happened to be a medium-sized cow standing there eating by itself. It had obviously gotten out of the field where it belonged. When the coyote came out of the covert, the cow took off and ran down the fenceline. The coyote got right underneath it and ran along with it for about 200 or 300 yards. Then the coyote turned right under the cow and went straight west while the cow continued on north.

Many thanks to Peggy Maness for these beautiful portraits of Harlequin! You can visit her at manessphotography.com

“That particular day, we had a few older hounds and a lot of younger hounds, because the fixture was a good place to bring younger hounds. One of older hounds was Harlequin. The hounds came spilling out of covert in full cry, but when they got out they quickly had a check, I suppose because they could smell that cow. We’d all seen the coyote come out, but the cow had foiled his scent. So the hounds swirled around and around, and it was Harlequin that left the group and went up and down that fence line, up and down, again and again. You could see he smelled smething but wasn’t sure. But then he struck off on the line right where the coyote had split off from the cow, like he was saying, ‘Here it is! Here it is!’

“He was that kind of hound: he would rely on himself to help. He puzzled it out, and he was the one who went back on his own to do that. And that does a lot for the puppies coming along, when you have a seasoned hound like that to lead your puppies. That what makes your puppies.”

Harlequin, a Crossbred, was bred at Iroquois out of Harmony, an English bitch Iroquois imported from the Bicester. Harlequin was entered at Shamrock, before he boomeranged back to us the first time. He’ll have a home for life here at the Iroquois kennels now under the auspices of the Hound Welfare Fund. Incidentally, like pretty much everybody’s 401(k) these days, the hounds’ retirement fund can always use support, so we encourage y’all to donate.

3 thoughts on “Harlequin gets his gold watch”