English import Strawberry made her debut at Iroquois on Nov. 4.

CALL it culture shock. Strawberry only arrived from England on Oct. 21, and the Nov. 4 meet from Boone Valley was her first day out with her new pack, the Iroquois hounds.

Strawberry and the three other Cottesmore hounds who came with her from England last month are now adjusting to a new kennel and staff, a new pack, new countryside to navigate, and new game to chase (coyote). Most importantly, they must learn to build a relationship with a new huntsman.

It’s hard to overstate how close hounds feel to their huntsman. Working pack hounds are trained to focus entirely on the person who carries the horn, and, as we’ve seen during hound walk and training this summer, the huntsman’s attention and approval is something hounds strive (and even compete) for. So to move from one pack to another isn’t just a change of environment; it’s like changing your whole family. Fortunately, hounds are highly adaptable animals. After a period of adjustment, they do figure their new lives out.

For Strawberry, that process got serious on Wednesday. Ever since she was born, she has known one huntsman: Cottesmore’s Neil Coleman. And when she stepped out of the hound trailer at Boone Valley on Wednesday, it was only natural, as she scanned the unfamiliar countryside and sniffed the new smells, that Strawberry would be looking for one person: Neil. 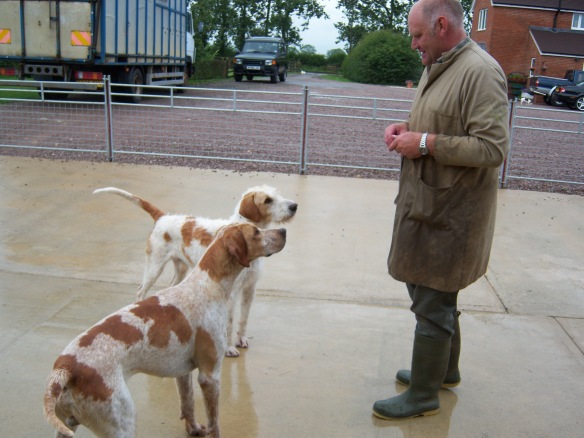 “Until now, he’s all she’s known,” said Iroquois huntsman Lilla Mason. “When she left the trailer, she looked around with a quizzical look on her face. She ran back to the trailer to Alan (Foy, kennel staff member). The rest of the hounds were going on.”

But Samson, another Cottesmore import who was on his second trip out with the Iroquois pack this time, stayed back with her, too, as if trying to tell Strawberry, ‘Hey, it’s okay, it’s still hunting, we have a new huntsman!’ 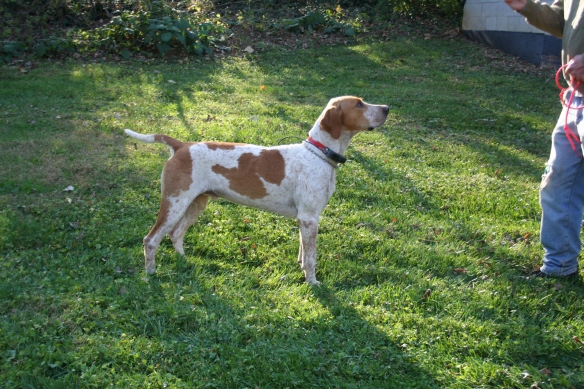 Samson, imported from Cottesmore at the same time as Strawberry, provided encouragement

Iroquois has imported hounds before, and so everyone knows well how to make their transition as smooth as possible. As she rode with the hounds to the first covert, Lilla was keeping Strawberry and the other new English hounds out that day–Samson, Hawkeye, and Structure–very much in mind.

Pack of hounds, sounds of horn, trotting to a covert–yes, it looks like hunting, Strawberry must have been thinking, but where is my huntsman? Where is his horse?

“She got back with the field, walked all through the horses, looking up at everyone,” Lilla said. “And then she just sat down and started howling. She just didn’t know what to do.” 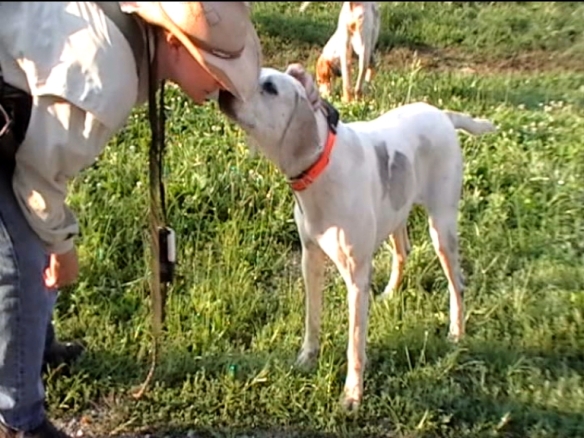 Hounds and huntsman develop a close bond. A change in huntsman can confuse a hound, but they also can adjust quickly to having a new leader.

“You can tell by looking at her that Strawberry is a wise old girl,” Lilla added. “She just has that face. When you go visit her in the kennel, she’ll come to you wagging her tail to say hello, and then she’ll go gently sit down and watch everything. She’s kind of above it all. She’s very regal.

“But that day she had the most confused look on her face!”

Strawberry hung back from the pack at first, still, it seems, trying to figure out where her leader was.

“I tried to use my voice, but that didn’t work as well as the horn,” Lilla said. “I would blow the horn, and she’d come a little way. She’d get up with the horses in the field, then start looking around, then sit down and howl again. It was like she was thinking, ‘I know I’m supposed to go to the horn, but it’s not the right horn, and I don’t see Neil, and something’s not right about this.’ But after the first hour or so, she started to get it. She wasn’t going to be with Neil, there was a horn, and the horn meant the same thing as it did before. But it was gut-wrenching at the start. I could see she was so upset not to be with Neil, and she didn’t understand my voice.” 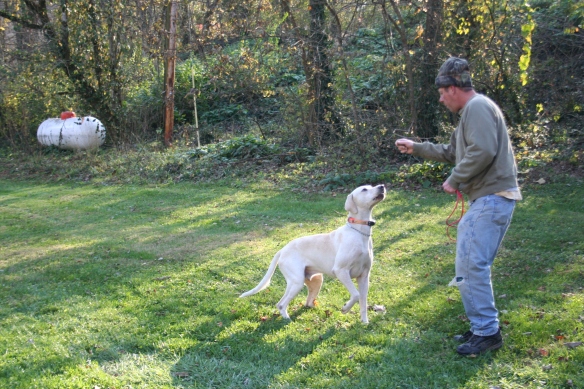 The other new Cottesmore hound debuting Wednesday, Hawkeye, had a similar moment of confusion but rapidly got on with the job. Structure and Samson debuted last week and also did well, but, again, they had to figure things out at first. 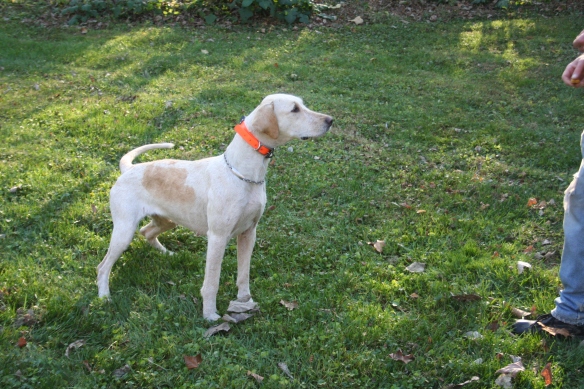 Structure also hunted Wednesday, her second time out with the Iroquois pack

“Structure wasn’t as expressive about it as Strawberry was,” Lilla said. “But she was confused and a little bit concerned. She was going to come, but she wasn’t sure she was supposed to, that kind of thing.”

Structure did get “thrown out” on her first day–not thrown out the way a baseball manager gets thrown out for yelling at the ump, but thrown out as in accidentally getting separated from the pack. “Then she spent the rest of the day looking for me,” Lilla said. “It’s just that she doesn’t know yet where she is. The other hounds know the score, they know where the holes under fences are.”

You might be interested to know that Samson, he of the mighty airport bark, has been quiet and professional so far! He, too, had an early moment of doubt. But as we saw Wednesday, he felt confident enough about the American style of hunting to encourage Strawberry to join up.

One thing everyone’s noticed about these English hounds: boy, can they ever jump.

“A wire fence is no boundary to them,” said Lilla. “They just sail right over it.”

Those are between three and four feet tall, ladies and gentlemen.

Strawberry performed one of these stag-leaps on Wednesday. Having found herself well away from the pack, separated from them by a fence, and having decided that the horn was indeed a cousin of the one she knew in England, she took a bold decision.

“She knew she wasn’t supposed to be off by herself,” Lilla said, “and she knew she had to catch up with that horn somehow. So she just leaped right over the fence.

“When we got back to the trailers at the end of the day, I hopped off my horse before the hounds were all in the trailer, because I wanted to give Strawberry a big pat. She looked at me like, ‘Okay, I get it now.'”

Which reminded Lilla of Neil again. On the trips she used to make herself to pick up hounds from the Cottesmore in England, the most difficult and wonderful part was the last moment at Cottesmore, when Neil would say his goodbyes to the hounds before helping Lilla load them up for the drive to the airport and flight to America.

Neil is a big, burly man, not necessarily the kind of guy you expect to crouch down and speak lovingly to a hound, stroke it under the chin and tell it goodbye, personally, one-on-one. But this is exactly what he did.

“That’s why they love him,” Lilla said. “Watching that, it makes you feel the great reponsibility to make these hounds happy, to do well by these gifts.” 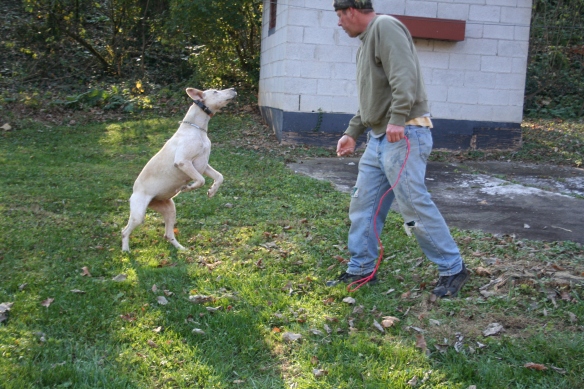 Strawberry and kennelman Michael Edwards share a dance: she really can jump!