TO RIDERS  in the hunt field, Michael Edwards and Alan Foy appear as two white trucks in the distance, if you even spot them at all. The two men serve as the hunt’s road whips: their function during a hunt is to protect the hounds if they run toward one of the country roads that cross the hunt country. They also collect hounds at the end of the day.

But that’s just the time they’re out and about with the hunt. Much of the rest of their working lives is spent in the kennel, well behind the scenes, doing the daily work to keep the pack (and the retirees) healthy, happy, and fit.

They’re like the backstage crew at a big Broadway show, and their work is critical to the hunt. In the kennel, they handle the daily feeding, medicating, and general care of about 85 hounds who range in age from newborn pup to 11-year-old retiree. Most–about 65–are working pack hounds, athletes in the prime of life. Fit and full of themselves, they have their own tribal rules and office politics, which Michael and Alan have to keep abreast of and manage, when necessary.

If you think working in a foxhound kennel is only about pouring Purina and cleaning drains, welcome to Michael and Alan’s office:

The office has a computer system that allows Michael Edwards and Alan Foy to track hounds' exercise schedules and veterinary updates, among other things.

The kennel computer and database track almost everything about each hound: when it hunts or goes on hound walk, when it goes to the vet and what procedures were done there, who needs what medicine when. It also allows the kennel guys to inventory supplies.

The daily medicine rounds are obviously important, but they aren’t easy when your intended target is walking around among a jostling crowd of 80-pound hounds, all of whom think you probably have a dog biscuit somewhere on your person. But on the day I visited, Michael waded through the hounds with surprising ease, even managing to get an eyedropper full of ear medicine into the proper ear, without a) fumbling the dropper so it gets trampled under everyone’s paws,  b) getting bitten by the hound whose ears have to be medicated, or c) accidentally squirting the dropper full of liquid onto, say, his own shirt. I have tried this at home with Harry, without four or five other curious hounds in my face, and it never went that well. 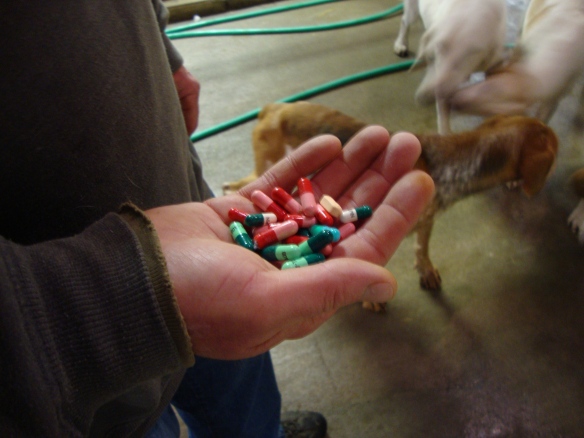 Michael keeps careful track of who gets which medicine and why. Dealing with veterinary medical issues is a key part of the job, both for maintaining herd health and for treating incidental cuts, scrapes, and other ailments

Michael keeps the medications for each group of hounds in one hand as he slips into each run. He learned long ago that digging them out of a pocket among the hounds was an invitation to chaos. Hounds are wildly curious about pockets, because everyone knows that’s where treats live, and a person reaching into a pocket is a person to mob before every other hound in the run can get there first. “They all think someone else is getting something special,” Michael explained.

Result: crushed pills or, worse, dropped pills that get snatched off the floor by the wrong hound. Hound rule number one: if a person’s got it, it’s probably a treat. Hound rule number two: if it drops on the ground, eat first and ask questions later. Fickle, Michael says, is particularly adept at that, and will even eat her own medicine right out of his hand.

Not everyone is so easy. Landsman, one of the retired hounds, is shifty about medication. He ate his breakfast with the other retired hounds but kept a wary eye on Michael. Landsman needs ear medication, which has to be dripped into his ear canal. Understandably, it’s not something he’s fond of. He licked the last of his breakfast off his lips, then made a stiff turn to the right to evade Michael, who was approaching due west with the offensive eyedropper of medicine. Landsman tottered quickly between me and the concrete-block wall, apparently intending to make a break for it down the kennel’s center aisle. 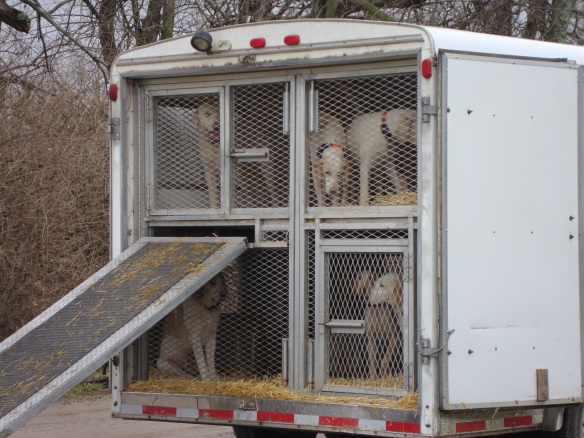 The double-decker hound trailer. Much like a school bus, really: everybody has his favorite seat.

“Landsman always thinks he can outrun Michael, but he hasn’t done it yet, has he?” Michael said as he intercepted Landsman. The old hound stopped, shoulders between Michael and the wall, and actually tilted his left ear slightly toward Michael. This was just part of the game, and, once caught, Landsman didn’t seem to mind the drops at all.

As they make medication rounds, Michael and Alan also check hounds over for unusual bumps, scrapes, heat, and swelling or other symptoms that something could be wrong. That’s important for many reasons–not least because an illness left unchecked could spread through the entire kennel. 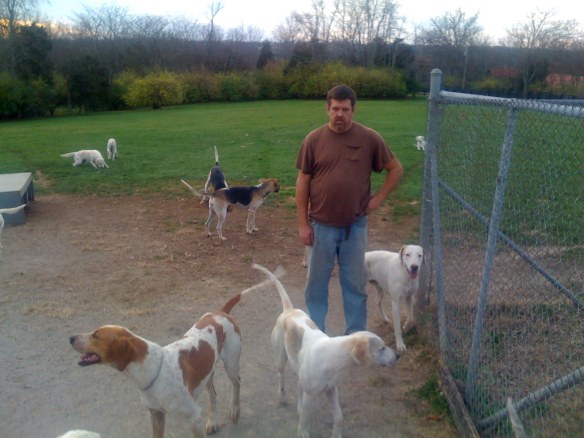 Alan Foy, an Army veteran who served with the 82nd Airborne, and some of the Iroquois hounds earlier this year

To the hounds, the guys in the kennel are both alpha dogs and sources of comfort. “If they get out hunting and they get somewhere where they don’t know where they are, when they see us, I think they feel like, ‘There’s Michael and Alan to come save us,'” said Michael. “I remember in Stomper’s first year hunting, he didn’t come in with the rest of the hounds. When I got down to Nan Price’s driveway, I saw this lump laying by the road. It was Stomper. I guess he just decided, ‘Well, it’s dark and I don’t know my way home, so I’ll just sit here and hope somebody finds me.’ I picked him up and got him in the truck, and he was just like, ‘Oh, thank you, thank you!’ You have to build that type of relationship where they’re like that, where they’re loyal to you.”

When Michael and Alan arrive at the kennel each morning, the hounds start up in greeting. First one, then another, then a couple more, until finally the whole kennel is singing.

A hunt day starts like any other for Michael and Alan, except that the hounds Iroquois huntsman Lilla Mason has selected to hunt don’t get breakfast–an immediate tip-off to them that they’re going hunting. Do they know? Michael thinks so.

“The fun part is separating out who goes from who doesn’t go, because they all want to go,” he said. “Finish will bite on your boot if you don’t take him out to go hunting, just to let you know he’s mad as hell he’s not going hunting.”

There are several reasons the hunting hounds skip breakfast. As with any athlete, you wouldn’t want their bowels to be full before they have  to run long distances. But Michael and Alan do scatter biscuits in the grass before they let hounds out of the hound truck at a meet, which helps prevent the hounds’ stomach acid from building up. They toss them biscuits again at the end of the hunt. That’s to help keep the hounds’ blood sugar reasonably high, says Iroquois joint-Master Jerry Miller, and it helps give them a good appetite for the full meal they’ll get back at the kennel after hunting. 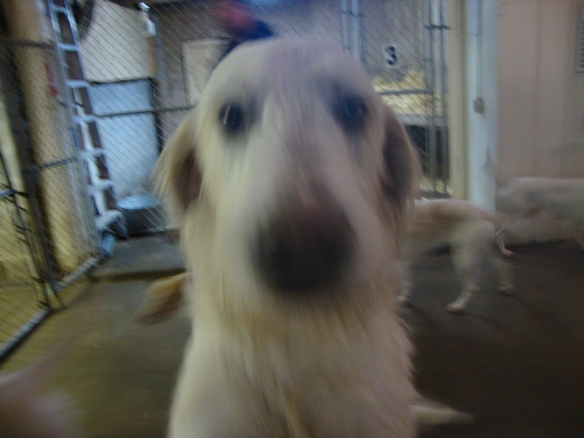 A woolly welcome: Sassoon says hello before heading out to hunt

Before loading The Chosen Hounds in the hound truck and driving them to the day’s meet, Michael and Alan put blaze-orange tracking collars on them, then turn them out into the grass paddock alongside the kennel for about 20 minutes. The idea is to let them empty themselves and gallop around a bit, but it was pretty clear on the day I was there that the hounds mostly just wanted on that truck. After a few minutes of perfunctory piddling and pooing, they filtered back over to the paddock fence and sat shifting their intense gazes between us and the hound trailer parked tantalizingly behind us by the kennel’s main gate.

Soon a few hounds started whining, and then more joined in, and eventually they were all sitting and whining, plainly trying to hypnotize us into loading them up now. Noooooooooooow. NOW. 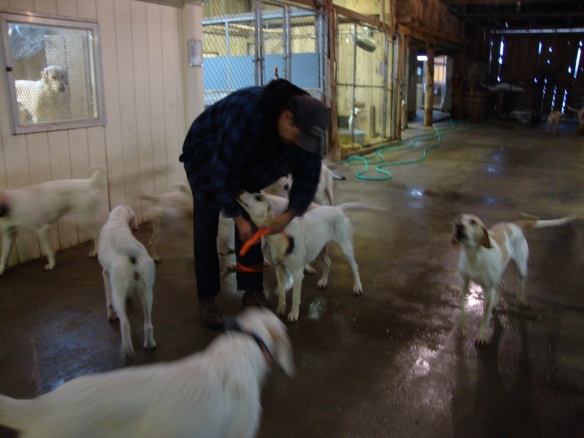 Even loading the double-decker hound truck requires a surprising amount of thought. For example, if one hound is intimidating to another, it might be best to keep them in separate compartments. Michael and Alan must always be aware of these developments that are part of the pack’s complex and changeable dynamics. For the most part, though, they allow the hounds to choose where they’re most comfortable.

“It’s kind of like the school bus when you were a kid,” Alan said. “You’d have the little area of seats you liked.”

Alan drove the hound trailer to the meet, while Michael took care of another important duty: setting the warning signs out on the road closest to the meet, a hint to drivers to keep their eyes open and their speed moderate. 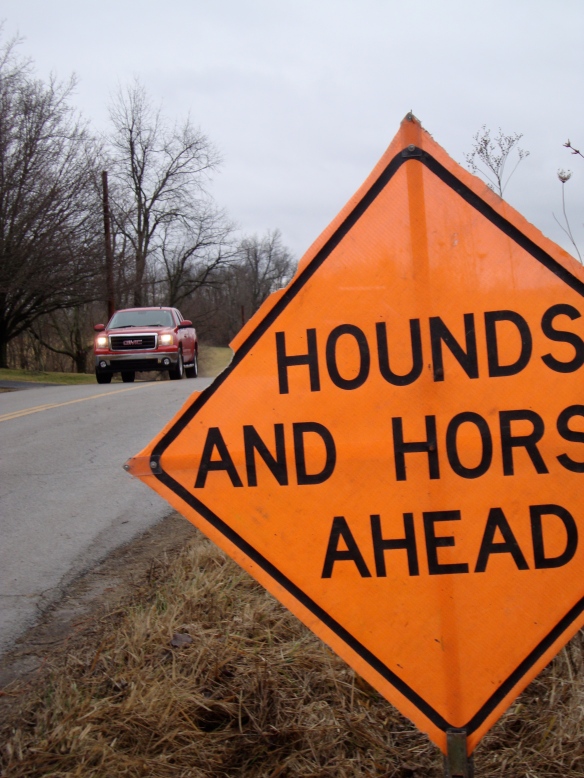 This particular meet at Foxtrot was a special one, because it was Lilla’s first day back after breaking her ankle back in November. The hounds didn’t seem to notice the change at first, but as soon as she spoke to them from the back of her horse, it was clear they recognized her and were glad to see her.

But we’ll save that story, and the tale of the day’s hunt, until tomorrow!

5 thoughts on “Backstage with the Hound Guys – Part I”