The Royal Artillery hounds with professional huntsman Rob Moffat at the March 24 meet.

ANY trip that starts off with hounds has to be good! Not long after we landed in England, we attended a meet of the Royal Artillery Hunt, Britain’s last surviving military foxhound pack.

The Royal Artillery Hunt is unusual in many ways, most notably for its hunt country. Most people, when thinking about English foxhunting, conjure up images of the rolling grasslands and terrifying five-foot hedges that Leicestershire’s fashionable hunts face on their fast runs. But the Royal Artillery hunts (within the law as decreed since the hunt ban of 2005, so they now drag hunt) across Salisbury Plain (for one photo, see here, though this doesn’t do full justice to the plain’s amazing sweep and great beauty). That presents an altogether different set of challenges for horse and rider.

Salisbury Plain appears, from a distance, innocently simple to cross. It is vast and, though a plain, it has quite a few gentle rises that just beg you to gallop up them. (Its most famous feature, incidentally, is Stonehenge, which once was a regular meet for the RA hounds!) The plain’s openness makes it a great place to watch hounds, and the hunt country’s description at the Master of Fox Hounds Association website makes it sound uncomplicated enough: “There is very little jumping: there are always ways round any fences. It is a good country for seeing hounds work, with few of the problems generally encountered in modern hunting. Sport is varied; there are some good long runs of up to ten miles unimpeded by roads, railways, wire or urban sprawl. Any horse, young or old, would enjoy a day on Salisbury Plain. The RA Hunt is run on military lines and is an exceptionally friendly hunt with a jolly atmosphere. Fields average up to 60 on a Saturday and up to 30 on Wednesday.” 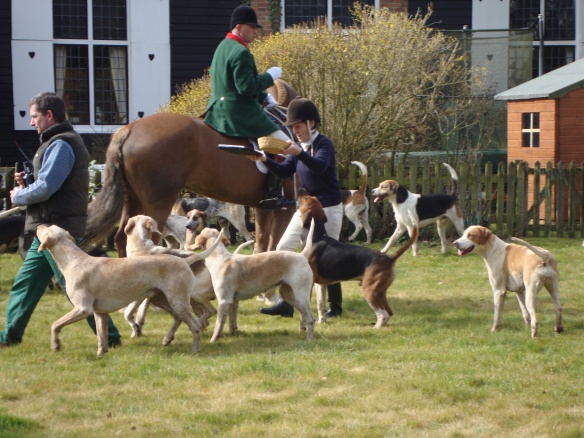 The RA hounds were interested in the stirrup cup.

But the 300 square mile Salisbury Plain also is a military training ground, and once you ride out on it, you begin to realize just how tricky it can be for the unwary! What the MFHA site doesn’t tell you is that you will occasionally gallop around a bend to find a tank or two in your path. There are horse-eating slit trenches dug into the ground here and there. Part of the hunt country passes a mock village used to train troops in house-to-house combat.  And the tank tracks can be a foot deep and extremely awkward to cross if you don’t know the trick to it, which is to always, always take them on the diagonal, and never try to cross them on the perpendicular. Children are almost always welcome to join the hunt, but not, the hunt says somewhat ominously, “on days of military activity.” You get the idea.

The Royal Artilery hounds. You’ll notice a few that are slightly woolly, but most are smooth-coated.

Once you’re over your initial surprise at the unusual conditions, you settle in to a great day of hound-watching. Despite the military activity, including regular firing pratice, the vast plain is full of wildlife, including red foxes, badgers, and the great bustard, a large bird. It also has some farmland, and so there’s a lot to see. And Salisbury Plain is truly beautiful, changing colors with the seasons and as cloud and sun pass overhead. Definitely worth a trip. 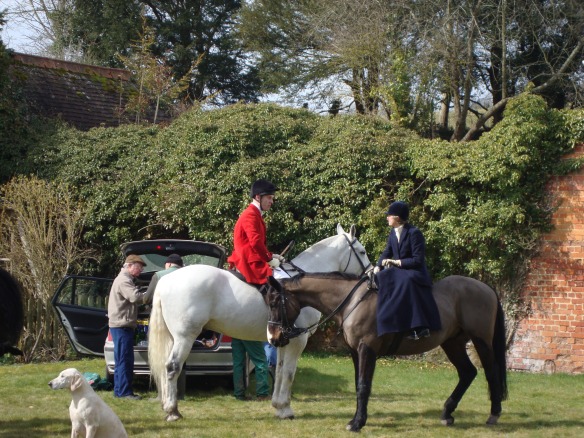 A handsome pair in conversation at the Royal Artillery meet.

A note about the gray horse you see in the picture above. We’ve bumped into him before–and photographed him–on our last trip to England, when we visited a horse trials at Larkhill, a racecourse and fixture for the RA hounds. That day, he was ridden by an officer in the horse trials, and on this day he was taken hunting by another officer. The horse’s name is Ollie, and we recognized him easily, because he is missing his left eye–not that that stops him from leading a highly active life as one of the Royal Artilery saddle club’s mounts!

The saddle club provides an excellent opportunity for soldiers to learn to ride or to continue riding, and there are lots of chances for them to compete, too, in local events. It’s a great feature that undoubtedly has helped introduce more people to the joys of a day behind hounds. 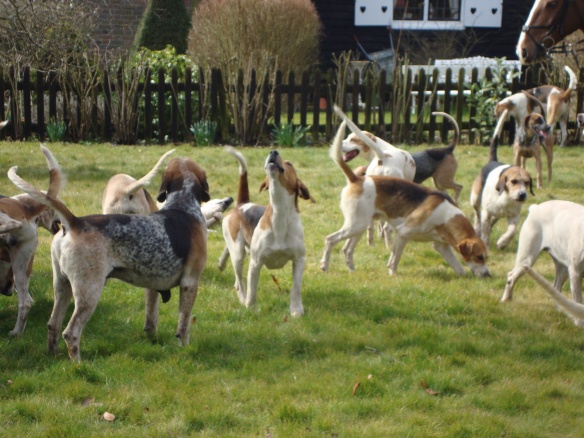 One of the RA hounds makes the rounds at the meet 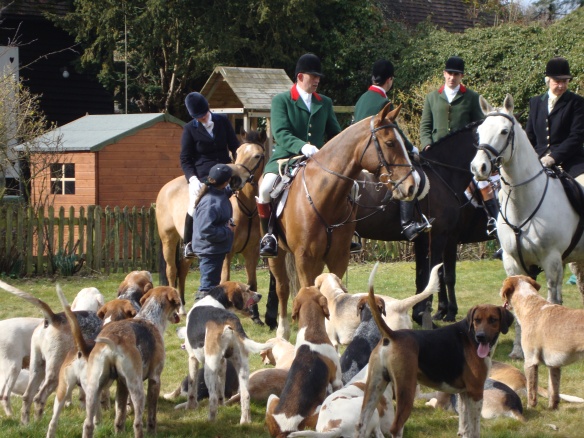 The RA hunt staff wear green as a nod to the RA Hunt's history as a harrier pack. The RA changed its pack to foxhounds in 1946.

Some of the RA pack's woollier members.

We will have video from this meet, including hounds’ voices and the huntsman blowing his horn to gather start off from the meet, on Wednesday when we are back in Kentucky.

To no one’s surprise, yes, I have been hunting the fertile ground of England’s second-hand bookstores again! As always, Mr. McGregor’s shop and the Heads’  sporting bookstore yielded treasures. From McGregor’s (better known by its formal name of d’Arcy Books, in Devizes), this great quote from Lord Willoughby de Broke’s The Sport of Our Ancetsors:

“When a highly-bred pack of Foxhounds have been running full cry for nineteen minutes and come to a check, the first thing they do is to quarter the ground and fling themselves this way and that, all with heads down, and some with hackles up, to recover the scent. There is nothing more beautiful and wonderful that this in the whole of Fox-hunting. Any mere human being in a red coat who tries to correct animal instinct at sublime moments like these, by makng a noise on a copper instrument, is at once a Philistine and a fool–a Philistine to try his hand on what nature is doing for him so much more artistically than he can do it for himself; a fool because no good pack of Foxhounds would take th slightest notice of him if it were anything like a scenting day.”

And speaking of copper instruments …

Next week we’ll also have a little video of the Cheffins auction at which the great 19th century huntsman Will Goodall’s horn was sold for £2600.  Sellers Denise and James Davies of Zimbabwe were delighted with the price but confessed to having mixed feelings about the sale.

James and Denise Davies (left and right), sellers of Will Goodall's hunting horn this week, with a houndblogger in the middle

The Davieses, like the houndbloggers, feel certain that the horn did indeed belong to Will o’ Belvoir, the subject of Lord Henry Bentinck’s classic hunting treatise “Goodall’s Practice,” and they are committed to trying to solve the greatest mystery of all: how the horn got from Goodall’s home at Belvoir Kennels in England after his death in 1859 to an auction house near Harare, Zimbabwe, some 150 years later.