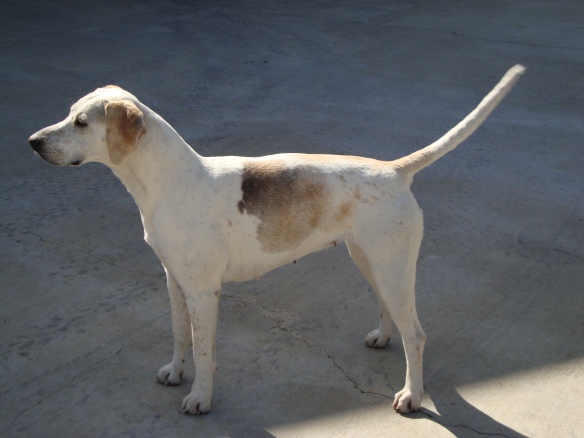 WEDNESDAY dawned chilly, with the season’s first light frost and thin fog here and there. A perfect morning to start the houndbloggers’ hunting season! We missed the first hunt of the informal cubhunting season on Oct. 2 in order to attend the World Equestrian Games, and we were glad to be back out again in the hound truck with Michael Edwards, the Iroquois kennel manager and a road whip for the hunt. 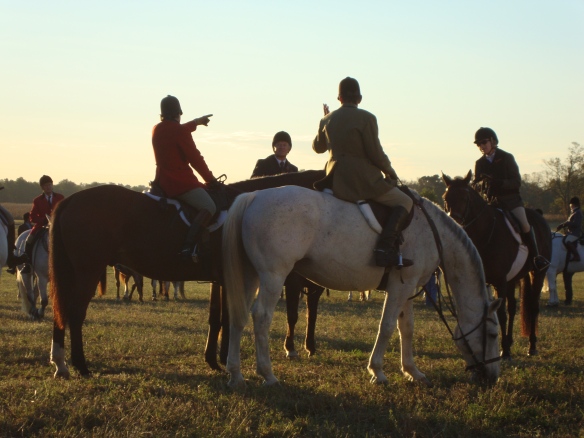 Huntsman Lilla Mason, on the bay horse, and joint-Master Jerry Miller discuss the morning's strategy with the whippers-in at Wednesday's meet. Iroquois joint-Master Dr. Jack van Nagell is visible to the left and behind Lilla, mounted on a gray horse.

The fog gave way to golden sunlight as hounds met at Foxtrot. Wednesday’s pack marked the debut of several of the year-old puppies, including Driver (whose mother, Dragonfly also hunted Wednesday and is our hound of the day!). Lilla opted to introduce the 10 puppies in small groups rather than all at once, and Driver had been angry not to be chosen in the first group of three that went out on Oct. 2. According to Lilla and Michael, he threw a bit of a tantrum over being left behind, flinging himself against his kennel gate and howling his disappointment. 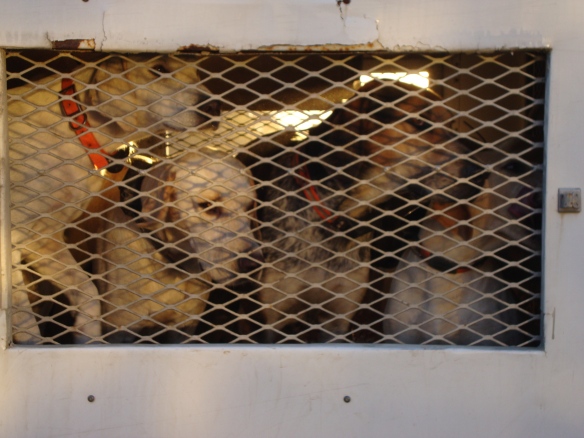 Dragonfly's son Driver, second from right, was glad to make his debut.

So Wednesday was a day of great excitement for Driver and Bangle, also hunting for her first time, as well as for the houndbloggers. We feel as if we’ve been too long away from the hounds, and it was good to see them again.

It was also a day of lessons for Driver and the BA litter puppies who are brand-new to the chase.

If anticipation has a sound, this is it. These are the hounds waiting to get off their hound trailer at the meet. As Michael prepared to unload them, they followed his every move. This video also includes some distant footage of a coyote we spotted mousing in the afternoon after scent had all but burned away.

Speaking of the heat, it’s worth noting the scent conditions. After a very wet spring, we have had drought conditions for the last half of the summer. If you’ve been watching the World Equestrian Games, you can see the frizzled, brown grass around and get some idea of the Sahara conditions after a rainless nine weeks in the Bluegrass country!

The wet early spring produced thick, scrubby coverts, but the drought and temperatures heading back into the 80s (is it really October?) mean there’s almost no scent to speak of.

Last year, curiously, we had much the same weather pattern, and when cubhunting season rolled around, it seemed as if there were no game at all. In retrospect, here’s what we think happened: in the hot, dry autumn weather, coyotes figured out that, under such poor scenting conditions, they could lie low in the thick coverts. Instead of running out in the open across the fields, they could simply creep from covert to covert with less fear than usual of raising a strong scent for hounds to pick up.

“Early in the season, what you really want is for the hounds to stay in the covert that you’re drawing until you move on to the next covert,” Lilla explained. “Otherwise, puppies will get left behind or hounds will get into another covert and possibly get on a run before puppies even have time to honor the cry.”

To help keeps hounds in covert, Lilla asks the whippers-in to surround the covert. That way, when a hound–particularly a puppy–pops out of the covert and sees a whipper-in, it’s more likely to return to or stay near the covert rather than independently move off to the next one. The whippers-in stationed around the covert also serve as extra sets of eyes on the huntsman’s behalf. 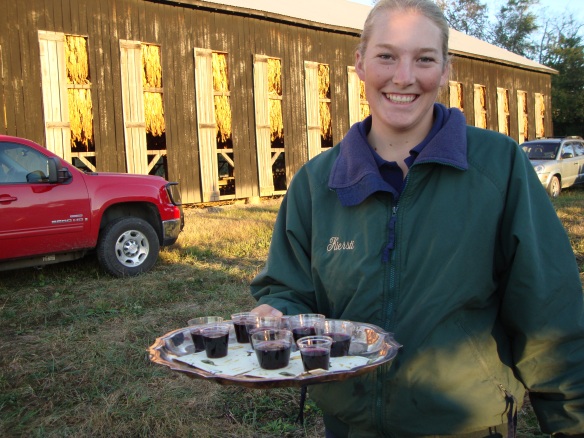 “I had two and a half couple of puppies out,” Lilla said. “That’s not that many, but when you try to put them in corn for the first time, it’s not very inviting to them. You have to rely on the older hounds to convince the puppies. So I stood there for a while. I had two first-time puppies, Driver and Bangle, with me. They stuck their noses in the corn, but there were thorns and things, and at first they decided, ‘No, I don’t think so,’ and they stayed with me. But then the older hounds started speaking, and suddenly they wanted to go in the corn. That was great. The older hounds’ voices draw the puppies into the corn, and then they want to stay in there, because they get excited about the fun going on there.

“Corn is a good way to teach puppies to draw a covert, but in some corn fields there can be weeds and thorns and things in there, too. But they get in there, and they follow the other hounds and hear the other hounds. It can make for good training.” 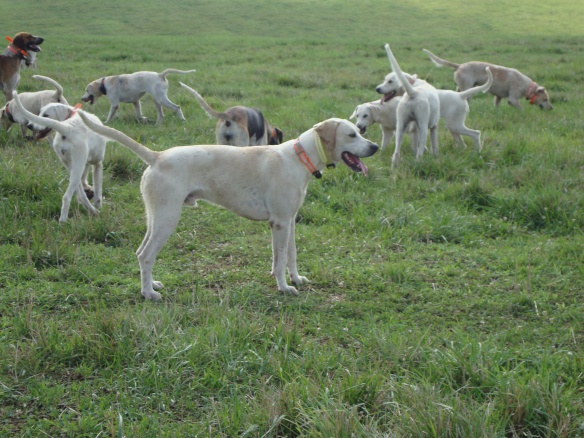 Hounds spoke in the corn, and the coyote ran around and around, and then joint-Master Jerry Miller spotted six couple of hounds running the line into the Cabin Covert.

In the rising heat and dry conditions, the scent did not stick around for long, and the hounds cast themselves back into the corn in some beautiful hound work. They screamed off again in the corn, but lost once again. They cast themselves north and east toward the Silo Pond Covert, but with no success this time.

At this time of year and in these dry conditions, and given what the coyotes are doing–lying low in the thickest scrub–it’s more advantages out to cast those areas, because that’s where game is. So Lilla headed south with the pack toward one of the thickest, biggest, most inviting coverts in the area: Murphy’s Covert. Her plan: cast the hounds there in hopes of recovering the line. 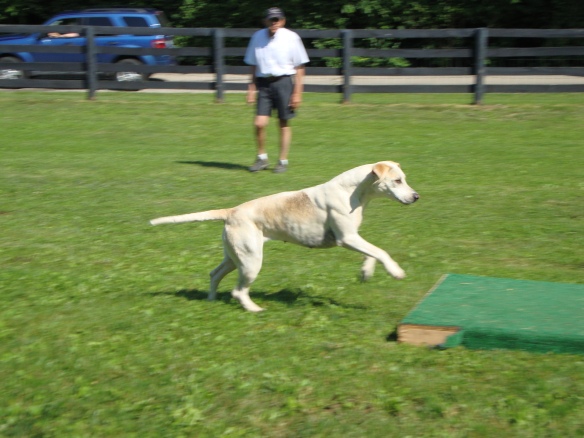 All muscle: Dragonfly training at home before placing second in her class at the Virginia Hound Show this summer.

The grass on the way to Murphy’s Covert was tall, obscuring her view, and as she rode on, Jerry radioed again with a crucial piece of information: Dragonfly, with a few older hounds not far away from her, was behind Lilla and feathering madly–a sign that she had picked up scent. Dragonfly and these hounds, it appeared, had made a U-turn in the high grass and were working back north toward the Cabin Covert again, while Lilla, with the young hounds, was heading south.

No sooner had Jerry told this than Lilla heard a wonderful sound: Dragonfly’s voice, behind her.

“She opened up,” Lilla said. “Everybody immediately honored her, and I thought, ‘Well, I can count on that,’ and I encouraged the hounds with me to join her.” 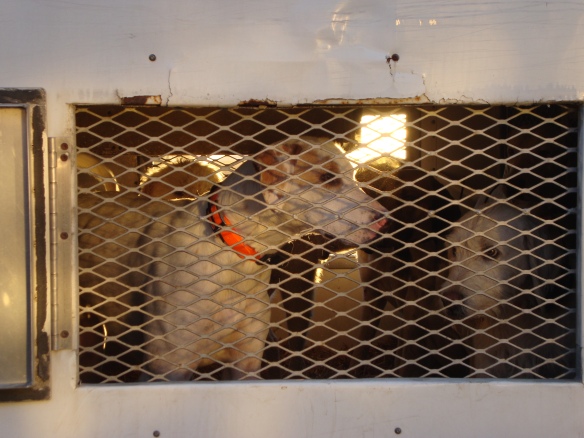 Banker, recently arrived from the North Cotswold in England, got his first experience of the Kentucky countryside at the Foxtrot meet.

Lilla’s decision to count on Dragonfly proved wise. Dragonfly, an import last year from the North Cotswold in England, knew what she was doing. Lilla put her faith with this hound who had hunted only fox in England and smelled her first coyote just last year.

“Dragonfly was just screaming, and off they went again,” Lilla said. “You know, coyotes will do that. They’ll get behind you a lot. And Dragonfly was smart. I think she’ll really beginning to figure out coyotes. She turned around and went back, toward the direction we’d already come from, and a lot of the older hounds were with her. Most of the hounds that were with me that I was taking to Murphy’s Covert were younger, and that made me think I should go back to see. And, yes, she was right.

“That’s why you count on old hounds like that. They call it fox sense. Well, Dragonfly’s got coyote sense now. She might not have last year, but she sure does this year, and she showed it to me Wednesday.” 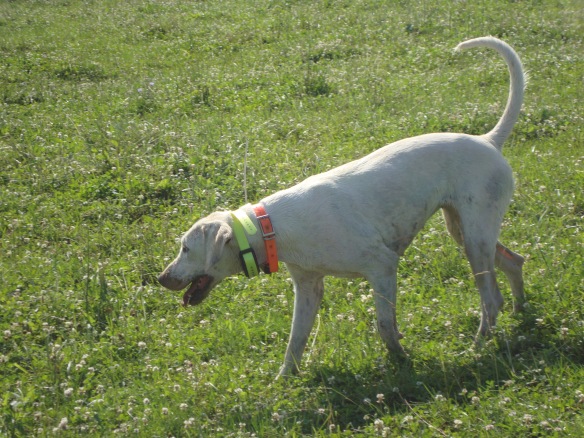 Goodbye, moles: Bangle on the move.

So how about Driver? How did he do on his first hunt?

“Driver and Bangle, it was their first day out, and so they didn’t want to go in the corn, and they were happy just to stay with me,” Lilla said. “When hounds spoke in the corn, they went in. But every time the hounds would quit speaking Driver would come out and start lollygagging about. Betsy, our field secretary, was standing out by herself, and she told me that Driver came galloping by her, as if he thought he’d just go off and explore on his own, maybe put his nose down and start investigating things.”

We’ve seen him do that early in his houndwalking days this summer, too.

“But suddenly Driver noticed her there on her horse, and she said he stopped as if he was startled to find her there. She got on the radio and told one of the whips he was over there. A whip came to get him back to the pack, and she said he glared at her, like he was saying, ‘You told on me, I know you did.’ 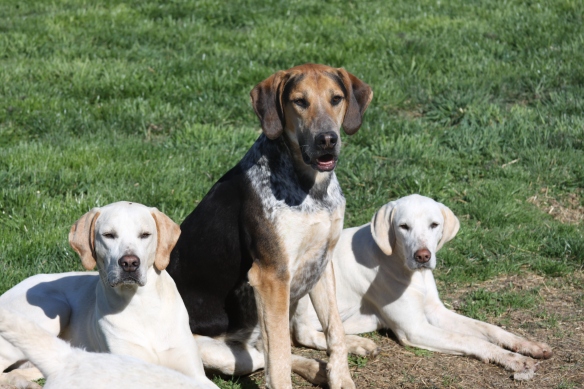 Driver (center) back in April.

“His immaturity showed that day. We’ll bring him out every hunt day. Paper was the same way, if you remember. He would sort of play and pick up garbage, but then once the hounds started speaking he was always there.”

“She got a little intimidated by all the horses, and at one point she got behind all the horses and couldn’t catch up to me. So I asked both fields to stop and I rode back there and got her eye and brought her forward. After that, she figured it out and knew not to get in back with the horses but to stay in front of them.”

Here’s another interesting side note about Bangle’s development. She might finally be outgrowing her mole hobby. Some people have a passion for fly-fishing, antique-collecting, or vintage cars. For Bangle, it was all about moles. It’s easy to see the appeal: they’re sniffable, they’re small and soft, and they probably make a pretty good snack if you dig down far enough to catch one before a whipper-in shows up to break up the party.

On hound walks, Bangle would slip away from the group and pull up to her favorite pasture for some digging–something the whippers-in and houndwalk volunteers quickly learned to anticipate and head off whenever possible. Because once Bangle was in her mole field, she was planning to be there as long as it took to find every single mole. (To see video of Bangle on summer walk–but no moles!–click the play button below)

But, on Wednesday, Lilla said, “I think Bangle is finally saying goodbye to the moles.”

I think we can all agree this is good news for both the hunt and the moles.

The star pupil at the moment: Backfire. We’d all been eager to see this handsome guy out on the hunt field, because he seemed so sharp even on hound walk in his early days integrating with the pack. He seemed precocious, and now it looks like that initial impression is bearing out.

“Backfire is really turning on,” Lilla said of Backfire after his second hunt. “He’s learned to honor cry, he’s very quick to cry, he’s just alert. Hyper-alert. The minute he hears something, he’s over there to find out about it. It’s not like he just stands and cocks his head trying to decide what to do. He automatically does it. He still doesn’t know what his nose is, but he is really enjoying this. It’s like he’s thinking, ‘This glove fits. I can do this!’ He’s just crisp and sharp.”

Conclusion: “It was just a great day.”

Next up … More oddities and some great marathon driving from the World Equestrian Games!

5 thoughts on “Hound of the Day: Dragonfly”