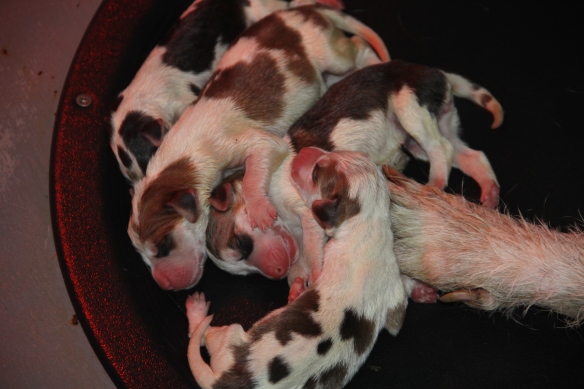 Some snoozing SAs. Driver and Sage are parents of the newest Iroquois puppies, the SA litter. Gene Baker photo.

YOU read it right: Driver is a daddy! He and Sage are first-time parents of the newest Iroquois litter. Mother and six puppies are doing well! If you’re a regular hound blog reader, the first thing you’ll notice, once you get past the sheer cuteness, is that these puppies are a colorful bunch in a pack that has a quite a number of white hounds. This gives the houndbloggers some hope of someday being able to identify these SAs properly in the hunt field! Our fondest hope is that some of these will turn out to be woollies like their mother. It will be some weeks before we will see any hints of the broken coat we love so much, and we promise to provide updates if we see indications of woolliness!

Look at all that color! The new SA litter looks like it might bring more black and tan into the Iroquois pack. Gene Baker photo.

It’s unusual for joint-Master Jerry L. Miller to breed a first-season dog, and when we heard that he’d decided to mate Driver we took it as an indication that the huge–and hugely popular–young doghound is indeed something a little special.

Since the puppies were born, we checked back in with Miller to get his thoughts on the mating.

Driver at the Virginia Hound Show in May. Photo by Dave Traxler.

One reason, Miller said, is that Driver is the only hound Iroquois has by the Duke of Beaufort’s Gaddesby ’07–you can see a photograph of him here, and he’s also in our video from the Peterborough Royal Foxhound Show earlier this summer. Gaddesby is Driver’s sire. A good-sized hound, he’s also a great outcross to the Iroquois hounds’ predominant bloodlines. The promise that Driver showed in the hunt field last season, in his first year of hunting, sealed the deal.

“He had a great season last year in the hunt field,” Miller said. “He was in on a couple of coyotes and he settled down nicely, and so I knew he was going to be a great hunter. He has nose, and he has unbelievable physical ability, so we figured we’d better not chance losing him next season in an accident or something.”

Sage and her brother, Sassoon, also go back to Duke of Beaufort’s breeding. In fact, Miller has tried to breed Sassoon twice but, so far, without success. That’s one reason he opted to breed Sage–to continue the great qualities that earlier SA family possesses. The older SAs including Sassoon and Sage hail from the brilliant ST Carlow line that we’ve written about before, and, in addition to being tremendous coyote- and fox-chasers, they’re also enormously biddable and personable.

“We were extremely lucky to get Sandal, who was by Heythrop Sanford ’97, a big stallion hound,” Miller said of Sage and Sassoon’s mother, Bicester with Whaddon Chase Sandal ’00. “We bred Grundy to her and got Sassoon, and you really couldn’t ask for any more. It’ s just top-notch, blue ribbon breeding.”

Two of the Driver-Sage pups enjoy lunch with their mother. Houndblogger photo.

We’ll keep you posted on the newest puppies’ progress, and as soon as we can get back out again on hound walk, we’ll check in again on the HA puppies that Hawkeye and Baffle had back in late October. They’re out with the pack on hound walk now, and the word we’ve gotten so far is that they’re big, beautiful, and confident. Can’t wait to catch up with them again!

7 thoughts on “Congratulations, Driver and Sage!”