IN case you were wondering, and even if you weren’t, here are the house hounds.

FELIX was king of the house for many a year. Alas, he died in February, 2009, at age 18 years 2 months, according to his veterinary records. A veteran of the Long Stray, he was the perfect dog and enjoyed his life with us until the end. Especially the cheese straws at our wedding reception in 2006, and the McVitie’s digestive once found, miraculously, on the saucer left rather fortuitously within easy reach on the side table.

HARRY. I can’t believe I drove three hours each way to get this dog. He turned out to be the tetchiest, most complicated hound–but also the smartest dog I’ve ever known. If only he would use his powers for good and not evil! With time and training (really psychology and careful outmaneuvering more than training), he’s become a surprisingly good dog. Grumpy when sleepy, but otherwise highly entertaining and really quite sweet. Likes coffee (which he will go to surprising lengths to acquire), sleeping under blankets, and bits of sweet-and-sour chicken, when he can find them.  A master of stealth: once stole the filet of chicken right out of my husband’s chicken sandwich without our ever even seeing him near the kitchen table. Also stole a peeled tangerine off my desk, again without my ever hearing him in the house at all (I found him out in the yard, staring at it: “What is this thing?”). Dastardly, but endearing. 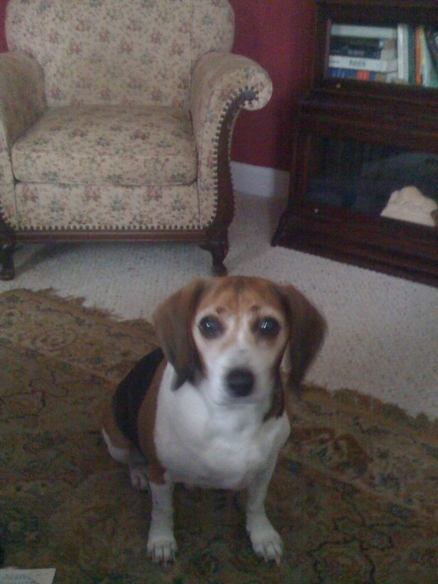 MR. TOBERMORY ICEBOX, known around the house as Toby, Tobes, or Mr. Box.

A washout from the Clear Creek Beagles. Five years later, still uncertain as to what exactly a rabbit is. Never ever mistakes a biscuit, however. Of royal breeding but completely unaffected by this or his extraordinary good looks. As graceful and athletic as a little Baryshnikov, and as friendly as any dog could be. Loves to lie frighteningly close to the fire, but hides any time we turn the oven on. The smallest dog in the house, but the toughest, by far.  He can smell a kleenex or paper towel from a distance of roughly three blocks. Obsessed with our next-door neighbor, Dave, who feeds a lot of biscuits through the fence. Claim to fame: has pointed for the Kentucky Derby twice, in 2010 and 2011.

Mr. Box in his favorite chair

BINGO. They told us he was a beagle. “Pure beagle,” in fact, is exactly the term they used on the shelter’s paperwork.  Hmm. Large-ish, shaggy, definitely not a beagle, but it seems pretty clear there’s beagle in there somewhere. We didn’t mind and were happy to take him. He’s the only hound in the house that actually has killed something. He got a squirrel that was a little too careless at the bird feeder, and a shade too slow dashing to the fence. We felt bad about this, but Bingo didn’t. We don’t have any more squirrels on our birdfeeders, so the birds hop around it all they want while Bingo lies there looking very protective and noble (sorry, he got a dove the other week: BAD BAD DOG. Update: And a baby opossum). He was not always so successful. As you can see from this … them squirrels is pretty sharp sometimes. The squirrels having abandoned the yard, Bingo has a new job: moving his toys (and the occasional decorative household item) outside, then back inside again. Despite his draconian views on squirrels, he’s actually very loving and friendly and is delighted to have a home and his own pack.

27 thoughts on “The hounds of Beagle House”