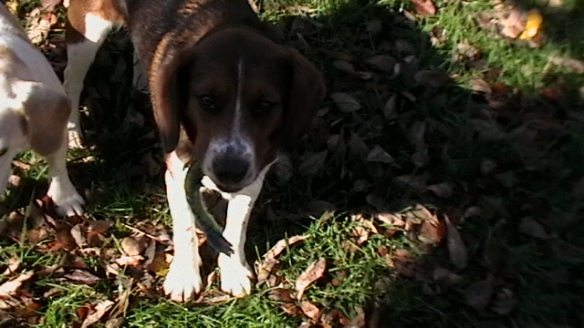 They'll eat just about anything ... once! In this case, thankfully, it's just a chew toy.

A FRIEND of the hound blog sent me this story about a subject familiar to many hound owners: the hound who will eat almost anything (and sometimes anything).

We at Beagle House have been lucky in this regard, in that none of our dogs, late or current, have ever eaten anything really, truly stupid, like, say, light bulbs or auto parts. But we do recognize the impulse Andrew Sullivan describes.

Harry, for example, first discovered his love of coffee mere moments after I had poured myself a piping hot cuppa. It was too hot for me, so I left it on the (appropriately named) coffee table and I went to start some laundry while I waited for the coffee to cool. From the laundry room, I heard lap lap lap lap lap. I assumed, as I sorted darks from lights, that it was just Harry drinking from his water bowl. But when I came back to the coffee table, there he was, his nose all the way into my coffee mug. The coffee was gone, and he was now testing the “good to the last drop” motto by licking out the last molecules.

What came next was a frantic call to the vet, who said, wisely, “Well, he’s going to be busy today.”

He was, but, strangely, not all that different from how he usually is.

"You gonna drink that coffee?"

The very worst thing Harry ever ate was–well, we’re not even exactly sure what it was. We think it might have been whatever the last bits of yogurt devolve into when they have been left in a garbage bag for some time. The smell was something never to be forgotten, and, we hope, never to be experienced again. When we took Harry to the vet, the odor wafted in with him on a vast fog of stink that caused the receptionist to rear back in disgust. Again, oddly, it didn’t have much effect on Harry himself, and he had no tummy trouble or loss of appetite afterwards.

Felix, the late king of Beagle House, was famous for eating anything and never having any ill effects from it. We assume he would eat unusual and/or foul things because he had been a stray for so long (he only weighed 12.4 pounds when we first found him). Along the way he had adopted the immutable ideas that you never know where the next meal might come from, and you better go on and eat what doesn’t eat you first. In Felix’s civilian, non-stray life, this included a dead baby ground hog, a mouse that essentially had become jerky by the time he discovered it, and cat food. He seemed to prefer things that were either  a) already dead or  b) on your own plate. He had a talent for efficiency. A real delicacy: moles. And he was fond of mice, which were in plentiful supply after the mower had gone  through the pasture behind the house I rented at the time, though mouse-eating was a habit I discouraged (mind you, I wasn’t all that happy about the moles, either–poor moles!). But Felix knew when it was mouse season, just as some people wait for the perfect two-week window for their favorite peach or long for fresh corn in summer. When we would go for walks after mowing day, he would step outside and raise his nose in the air, as if thinking, “Aaaah, yes! Mice today!” Yuck. His companion, Pun, once ate a rock (apparently this isn’t all that uncommon, as Gina Spadafori has been writing about over on the Pet Connection blog recently).

Mr. Box also is a fairly adventurous eater. I’m pretty sure he would try metal filings once, just to make sure whether or not he liked them. Fortunately, his favorite non-food food is neither disgusting nor too dangerous. Like most dogs, for whatever reason, it’s paper products.

So, on this Nov. 1, remember to keep Halloween candy well away from those hounds! 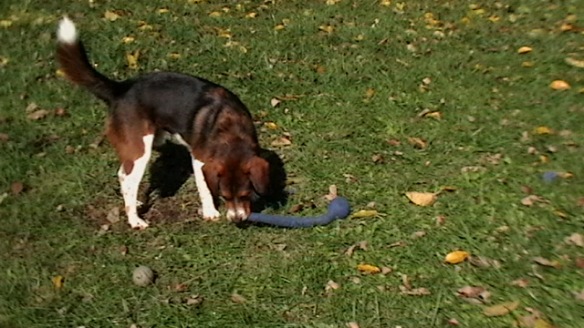