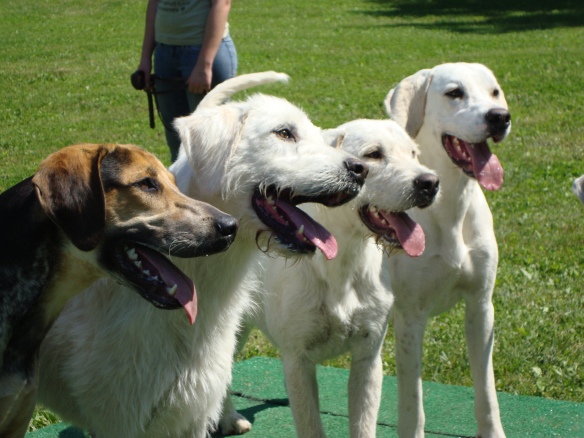 Some of the Iroquois hounds practicing for the May 30 Virginia Hound Show.

THEN we’ve got a Smilebox for you! Today was the final weekend training session before the hounds head to Morven Park in Leesburg, Virginia, for the Virginia Hound Show. On Saturday morning, this practice session drew a lot of volunteers, and joint-Master Jerry Miller took the opportunity to talk about hound conformation and showmanship. Joint-Master Dr. Jack van Nagell, who will be judging in the American ring at the Virginia Hound Show, also attended and commented on our hounds and their progress.

But instead of focusing on technicalities today, we thought you might enjoy a little Smilebox slide show featuring some of our favorite pictures of both young and older hounds and some of the great volunteers who have been working with them since last fall and winter. After all, this is why we love these hounds. They’re beautiful, personable, and fun. Especially the woollies. Especially the really, really big woollies. Not that I’m biased. So, as the song says, if you’re ever feeling down, just play this again and look into those wonderful bright eyes … and why not thank them for the joy they bring by making a tax-deductible donation to the Hound Welfare Fund?

Good luck at Virginia, everyone! We’re pulling for you! 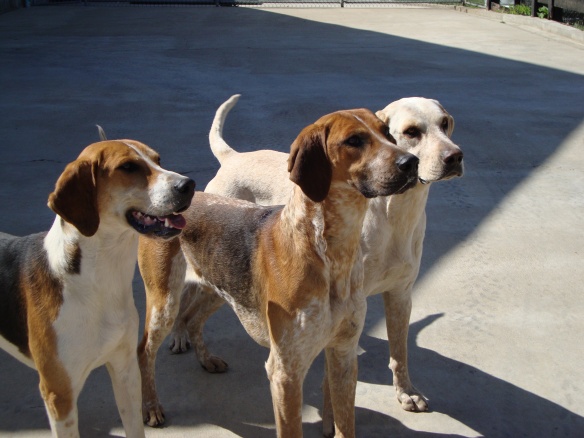 The Iroquois Hunt's young hounds--Paper, Gaelic and Hailstone, in this picture--are preparing for the season's hound shows

THE Kentucky countryside is lush and green, and hunt season has been over since the end of March. We’ve put our wool hunt coats in the closet until next fall. But some of the Iroquois hounds are still at work. This time, they’re preparing for upcoming hound shows.

How a hound performs on the hunt field–its fitness for the breed’s purpose–is the ultimate test of a hound’s breeding and physical conformation. But the show ring presents a chance for hunts to get outside opinions on their hounds’ breeding programs–at least regarding conformation. Even so, as at any dog show, judges at hound shows have their own likes and dislikes, in addition to their opinions on what conformation works and what doesn’t. In other words, judging a hound isn’t simply an exact science, it’s also an art significantly colored by personal preferences.

One common bias, for example, is against broken-coated, or “woolly,” hounds. I was once asked to help our huntsman, Lilla Mason, show one of our woollies at the Mid-America hound show, and while the two judges were looking the hound over, I overheard one of say to the other, “You know you’d love that hound if I threw a bucket of water over his back!” The hound won, by the way, so I guess Judge A convinced Judge B!

Iroquois huntsman Lilla Mason trains the hounds for showing. They will be required to stand in a way that shows off their good conformation. Working hounds also are often shown off leash, galloping after thrown biscuits, so that judges can see their way of going.

The art of judging hounds is mysterious to me. Conformation faults that hound breeders can spot at 300 yards while wearing a blindfold are often invisible to me. Unless a hound’s leg is actually put on backwards, or it has three ears, I am probably going to miss whatever it is the judges find–especially at a show like the upcoming Virginia Hound Show, where the competition is so fierce that the judges will be asked to choose, time and again, the best of a perfect group of hounds and will have to get pretty nitpicky in order to determine winner from runner-up.

We got a chance to get a judge’s eye view at a recent open house at the Iroquois kennel. Lilla and Iroquois joint-Master Jerry Miller have been working with the hounds that are candidates to show this summer (Iroquois joint-Master Dr. Jack van Nagell will be judging the American hounds this year at the Virginia Hound Show; because Iroquois only has English and crossbred hounds–meaning English crossed with Americans–he won’t be judging of his “home” pack!). At the open house, Jerry offered his view of some of the hounds’ conformation and Lilla described how she handles hounds in the show ring. Both talked about how important it is to build hounds’ confidence and obedience before shows. In a ring full of other hounds and other huntsmen tossing biscuits, Lilla’s hounds have to be able to concentrate on her and her alone–a big task for some puppies, for whom everything is new! Hound shows may be something of a beauty contest, but training for them also serves a good purpose on the hunt field, too, by reinforcing this concentration and attention to the huntsman.

IHC member Cooper Lilly says hello to one of his favorite hounds, Payton, a winner at the Virginia Hound Show in 2007.

We’ve followed Driver’s progress since he was a not-so-tiny pup, and in mid-April he got rave reviews from visiting huntsmen who toured the Iroquois kennel as part of the Master of Fox Hounds Association’s biennial hunt staff seminar.

So we were especially interested to hear Jerry’s remarks about Driver now that he is developing into an about-to-be-entered hound (he’ll join the Iroquois pack this coming fall). Below, you’ll find a video showing Jerry’s take on the strapping young doghound, who is still developing as he reached his first birthday this month.

Jerry compared Driver favorably to some of the younger puppies, who were born about a month after he was last year, noting that Driver naturally has got more muscle development this year. His chief attribute, not surprisingly, is power. He springs lightly over the ground with little apparent effort, and he has a ground-eating stride. Lilla’s task with him is to control his exuberance and maintain his concentration, and in this clip you see some of the strategies she has to use in the show ring, such as keeping the hound far enough away from her so that they don’t hold their heads up too high in the air, which makes their necks and shoulders difficult for a judge to assess accurately.

As a reminder, Driver is one of our English hounds. Iroquois imported his mother, Dragonfly, from the North Cotswold.

While working with young Battle, one of the BA litter out of our imported English hound Cottesmore Baffle, Lilla and Jerry pointed out some of the finer points of hound conformation: does his left paw turn in slightly or does it not? These are the kinds of details that an experienced judge will be focusing on, especially when presented with a ring full of uniformly high-quality hounds like those at the Virginia Hound Show. Lilla and Jerry also provided a lot of insight into the art of showing hounds effectively. There are strategies a huntsman can use to, as the song goes, accentuate the positive and “lowlight” the negative in a hound’s conformation, and a hound’s own personality can also make showing him easier or harder. A shy hound, for example, is difficult to show and is far less likely to earn a good mark than a more exuberant one who appears enthusiastic in the ring. More on showring strategy later this week, including a lesson we can take from hound-show training and apply to better behavior in our house dogs! Except probably for Harry the charming villain.

In addition to discussing hound conformation, Jerry also touched on some of the history of modern hound breeding, specifically how the size of English hounds has changed somewhat over the decades. He also talked a little about the differences between chasing fox and chasing coyote, effectively a change of the working foxhound’s job description. To hear a short clip on those topics, see the video below.

The Virginia Hound Show is coming up on May 30, and we’ll keep you posted on the hounds and their training between now and then!