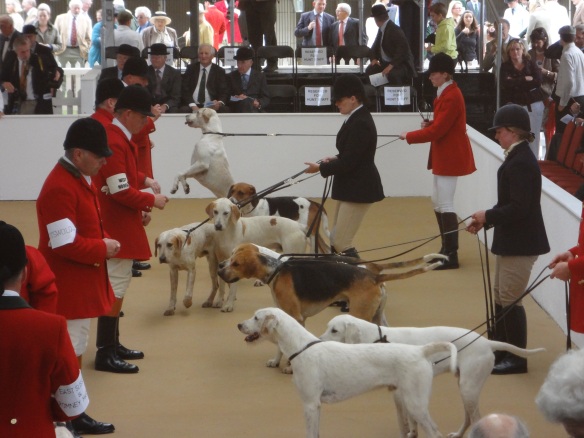 THEY call summer hound shows the “silly season,” and certainly it is not really the same thing as hunt season. Working pack hounds are bred for the hunt field, not the show ring, after all. But, all the same, showing at the Peterborough Royal Foxhound Show is serious business for competitors, and the show offers Masters and huntsmen a great chance to look over potential stallion hounds and examine other hunts’ bloodlines. For the houndbloggers, the 2011 show was the perfect opportunity to see the hound world’s great variety, to eyeball some of the sport’s most prestigious pack members, and to spot some hounds from bloodlines that link with our own Iroquois pack.

A glimpse of Driver’s father

Perhaps the most notable “Iroquois relation” we saw was the Duke of Beaufort’s Gaddesby ’07, sire of our own young dog Driver ’10. We spotted Gaddesby in the Best Stallion Hound class, where, alas, he was unplaced. But we did manage to get a couple of quick snapshots. 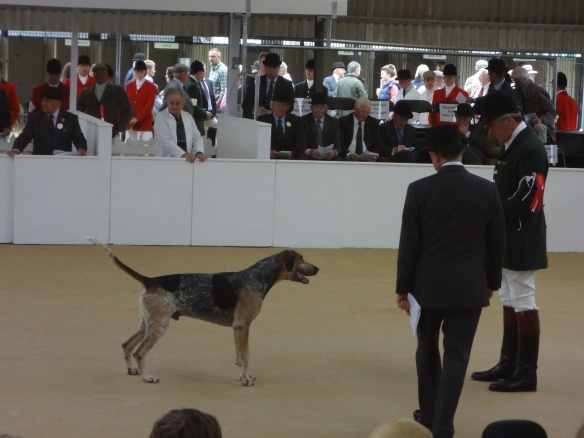 Gaddesby '07 in the stallion hound class.

Driver after a hunt in March.

Gaddesby’s conqueror in the Stallion Hound class was Duke of Beaufort’s Doynton ’09, who went on to win the Champion Dog Hound title over the Vale of the White Horse’s young dog Ptarmigan ’10.
Peel’s words of wisdom 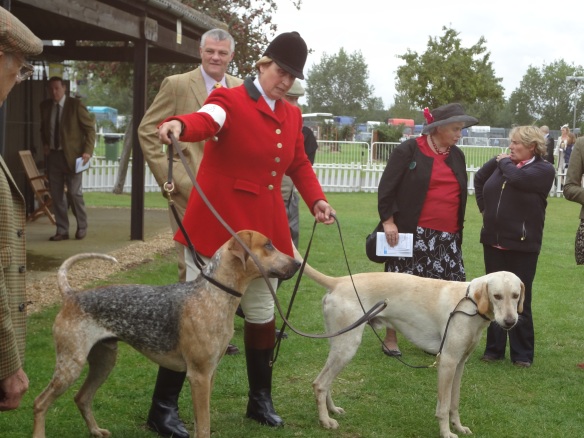 The Grove and Rufford prepare to enter the ring at Peterborough on July 20. Their dog Stafford, right, won the Best Unentered Dog class.

In the issue of Horse and Hound that came out immediately before the Peterborough show, North Cotswold Master and huntsman Nigel Peel wrote, “Hound shows are wonderful summer gatherings, and it is a great joy to admire the best lookers of the breed. But remember that that is what it is–a beauty competition. Do not get downhearted should your hounds fail to find favor. Remember that you are taking part in a pageant and in so doing you are holding your hunt’s flag high for all to see. … We all get slung out of the ring from time to time, and sometimes it is quite hard to remember that it is the taking part and not the winning that counts.”

Huntsmen wore their prizes on their sleeves.

At Peterborough, as it happened, Peel’s hounds rarely were “slung out of the ring.” The North Cotswold bitches, in particular, had a fantastic day. Bobbin ’10, Bobtail ’10, Gradient ’10, and Gridiron ’10 won the Best Two Couple of Entered Bitches class, while Caroline ’08 was judged Best Brood Bitch. Bobtail went on to finish second, as reserve champion, to Heythrop Mellow ’10 in the Champion Bitch class.

The North Cotswold dog hounds fared well, too, taking the Best Couple of Unentered Hounds class with Gregory and Growler. 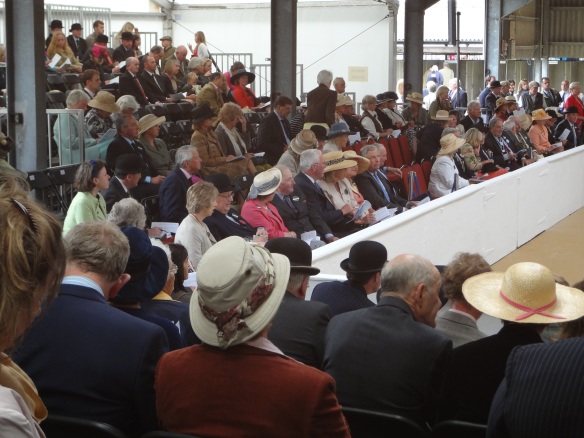 The crowd in Peterborough’s main arena, where the modern foxhounds were exhibited.

Having met up with him at the foxhound ring, we took the opportunity to ask Peel about some of the hounds he has sent to Iroquois–most notably our late, great stallion hound and superb coyote hunter Grundy ’98, who died in 2008.

Grundy was a son of the North Cotswold’s Peterborough winner Grapefruit, and Peel’s reminiscences of Grundy went back another generation, starting with Grapefruit’s own mother.
“Her mother was a very, very good bitch, a wonderful hunter, and Grapefruit we were very lucky with, because she was walked by Charlie Warren, a great North Cotswold puppy walker,” recalled Peel. “He actually had driven the first tank onto the battlefield at Alamein. We had a lovely hound that he had walked the year before that we had won a lot of prizes with, but, sadly, she was poisoned out hunting. Charlie said, ‘I think I’ve got one that might be as good.’ And, by God, he had: that was Grapefruit.
“In her first year here at Peterborough, she won the Best Unentered Bitch, and the following year she won the championship. She was a terrific hunter, like Nimrod a mighty hunter before the Lord, and hated foxes. So we thought we must find her a really good husband. In those days, Tim Unwin was Master of the Cotswold and a very, very fine breeder of hounds and a good huntsman. We used his dog Patron, a gray dog, I remember. That produced Grundy.”

What made Patron the right choice for Grapefruit?
“He was a lovely-looking dog, and he had terrific quality,” Peel said. “He just struck me as being a very good sort of stallion hound to use. And the breeding linked. I always line-breed our hounds, and the breeding fitted in beautifully. So we thought he was the one to have.
“Jerry Miller wanted a dog hound, and we called this whelp Grundy because, when Iroquois was formed, it was named after a horse that won the Derby.

Old English hounds exit the ring after a class at Peterborough.

“Grundy was walked by Charlie Warren, and our chairman at the time was Tim Holland-Martin, who had bred the horse Grundy, who had also won the Derby,” added Peel. “So that’s why we called the hound Grundy, because we thought that it was appropriate. Grundy came to you principally because Jerry Miller wanted a hound or two, and it’s rather difficult to refuse Jerry Miller!” 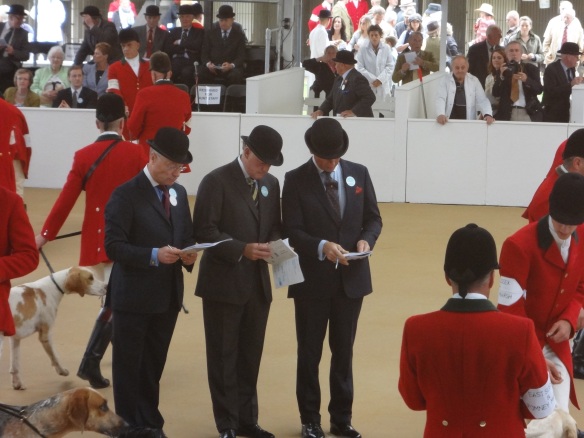 Peel later saw the hound Grundy in Kentucky, and he was pleased with how he had developed.
“I thought what a very good one he was,” Peel said. “His sisters we had, and we bred from those and we’ve got hounds that go back to them today here at Peterborough.
“I’m really pleased that Grundy did so well, not only in the showing, but also that he was a really first-class dog in his work.”
There’s more to come from our Peterborough report! Stay tuned for more pictures, some video, and more from Nigel Peel.