Paper (left) is growing up.

IT TAKES a village to raise a hound, in a manner of speaking. Huntsman and kennel staff are key in any hound’s development and training, and his interactions with the whippers-in are also educational. And don’t forget the importance of positive peer pressure: his fellow hounds are crucial teachers, too, providing lessons in everything from pack and kennel etiquette to the do’s and don’ts of the hunt field.

Earlier this year, he was “Playper,” always finding some object to carry around in his mouth or some curiosity to tempt the other puppies with. Now, as his first season in the hunt field unfolds, our Paper is showing more maturity. He still gets separated from the pack more than one  would ideally like, but he’s clearly mindful of the Golden Rule huntsman Lilla Mason schooled him on during summer walk: with pack=good, away from pack=bad. Now, when he finds himself out on his own, Paper follows the sound of the huntsman’s horn and voice and makes his way back to the pack.

We can see his maturity in other, more subtle ways, too. Though he’s still a teenager and throws in those joyous leaps now and again, he’s leaner and more professional these days. If we were to sit down for a parent-teacher meeting with Paper’s first-season profs, they’d probably say he needs to apply himself more to the work at hand, but he’s definitely shown some improvement as the season continues.

The hunt met at Foxtrot on Saturday and enjoyed an early run, but warming temperatures and a brisk breeze (which you can hear on the video) played havoc with scent. At least four, and by some counts as many as six coyotes burst out of the Cabin Covert. From our position as car-followers, we could tell for certain that one ran east and at least one ran south. The hounds screamed after the one heading south, but when they lost their coyote nearing the border of a neighboring farm hosting deer hunters, it became necessary to bring the hounds back toward the Cabin Covert again rather than cast them again in an attempt to follow the south-bound coyote; the chance of barreling full tilt into a deer hunter was just too great.

Car-following has its limits, and we experienced those on this run: we could hear the hounds but couldn’t see them from our vantage point. We did hear some beautiful hound music, and there are times I’m just as happy to hear the hounds on a run as I am to see them, but I am disappointed not to have captured that on videotape.

We were able to capture some good examples of hounds feathering when they returned to the Cabin Covert, knowing as they did that a coyote had left there. They clearly found a low spot where the east-bound coyote had crossed when leaving the covert and racing through a field of corn stubble. The hounds that passed that spot feathered and feathered, obviously smelling the last remnants of scent, but in the challenging conditions–an older line on a breezy day as the temperature climbed–it did not, alas, result in a second run.

Middleburg's Red Fox Inn, dating from 1728, is the town's most famous landmark

Half of the houndbloggers are now in Middleburg, Virginia, in the heart of the commonwealth’s hunt country. It is in the nature of houndbloggers that they do not, as a rule, like to be separated from each other, but this is one of the rare cases when we considered that two weeks apart was worth it. Why? Would you be surprised to know that hounds are involved? I’ll be here in Middleburg doing some research at the National Sporting Library, while

Christopher (above, the one wearing tweed) stays at home and continues the futile effort to keep the Beagle House hounds off the bed and under control.

I hope to have some interesting things to report on from Middleburg, including the National Sporting Library, some thoughts from local huntsmen, and some photos of a couple of local packs, both foxhounds and beagles. And a real highlight, the December 5 Christmas in Middleburg celebration, when the Middleburg Hunt meets downtown and trots up Washington Street–we’ll try to get photos and, if possible, video of that! 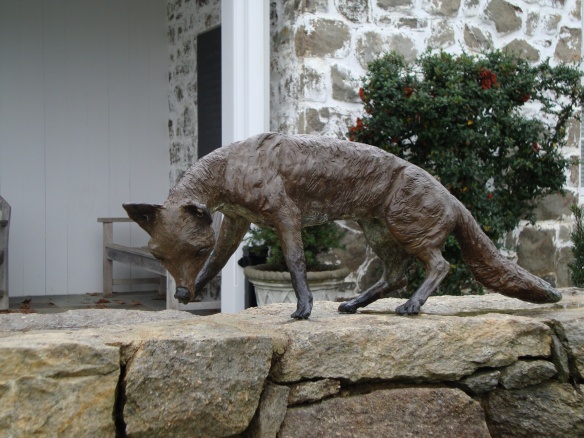 This little fellow greets visitors at the National Sporting Library

One final note of interest: the hound blog is now linked online at Baily’s, the worldwide hunting directory that is based in England! The new online Baily’s site is really excellent. It does require a subscription to access full stories and large photos, but you’ll be glad to know they’re running a special subscription rate of about $25 at the moment; for more information, check the link above (a link to Baily’s is also listed under our “Interesting Places” and “Hound Resources” link lists to the right-hand side of our home page). In the meantime, it doesn’t take a subscription to enjoy the great photos in the Baily’s online gallery or the photo slideshow on their homepage. Tell ’em the Hound Welfare Fund sent you!