The hounds with huntsman Lilla Mason on their Aug. 26 walk.

DID you catch a whiff of it this morning, too? The faint scent of autumn? The houndbloggers did. I love the smell of autumn. It reminds me that, no matter how miserably hot the summer, cooler weather–and hunt season–are right around the corner.

Cool temperatures also sharpen the hounds’ senses. They’re also fitter, and the puppies (Driver and the BA litter, all just over one year old), who have yet to join the pack out hunting, are getting clued in to the fact that there’s a point to all this training they’ve had on summer walk. By the way, they seem to be asking now that the air is cooler and morning scents are stronger, what’s that delicious smell?

“The challenge today is that it’s cool and the ground’s really moist,” Iroquois huntsman Lilla Mason said. “The whips need to be on their toes to see if any of the hounds put their noses down. It wouldn’t be such a big deal if a puppy puts his nose down, but if you get some of the older hounds putting their noses down, you better watch out.”

A keen, fit pack of hounds plus cool air plus scent lines could equal chaos. The Iroquois hounds are keen, all right, but they were remarkably relaxed when the houndbloggers joined them on summer walk this morning. Their lessons about cattle also seem to be sticking. On Wednesday, Lilla brought 17 couple out for hound walk only to discover an entire herd of cattle had crowded up to the front of the field where she walks the  hounds.

“Cattle were stretched everywhere,” kennel manager Michael Edwards said. “Calves, mamas, bulls. Calves were running all over the pace, and these hounds were unbelievably good.”

Everything, at this point, can provide a good lesson for hounds that are almost ready to hunt–especially for the puppies, who are nearing their debuts with the working pack this fall. When two young women accompanying the hound walk on horseback began chatting, Lilla pointed out that the extra voices–while not ideal in the hunt field–could be useful today.

“They’ll have to get used to that in the hunt field,” Lilla said of the hounds. “They have to learn to distinguish my voice from other chatter.”

The hounds rushed into the pond, eager to play in the own waves and catch the biscuits Lilla threw to them. Paper, now an old hand at summer training, simply stood and waited for a biscuit to come his way.

“They’re ready to hunt,” Lilla said. “There’s not much else I can teach them on hound walk. They’ve learned to stay behind when I need them to, they’ve learned to stay with me. We’ve hit lines on certain days and gotten them off those and settled back down again. You can see that they’ll trot off and then turn around and check on where I am. I’m still carrying biscuits, but I’m not using them very much.

“They’re really on schedule,” she added. “Kind of ahead a schedule, really. We’re still working on a few little things. For example, when I say ‘Come behind,’ Bangle and Bandstand still shoot ahead. It isn’t a big deal, but I do need to fix those kinds of things. Out hunting, if I’m trotting toward a coop and say, ‘Come behind,’ if they get ahead I can’t jump the coop. They might get hurt. So I need to keep working with them on that.”

Lilla believes one reason the hounds stay so relaxed out walking even at this energizing time of year, is because the Iroquois kennel provides a lot of turnout. The hounds give themselves plenty of exercise in the 15-acre fenced paddock adjacent to their kennel, and even that has offered some unexpected training.

Three deer, Lilla explains, have taken to jumping into the hounds’ turnout pen. That gives the hounds more opportunity to get used to –and ignore–deer and their scent, and it seems to be working, because the deer keep jumping in. That’s a sign they don’t feel threatened by the hounds, which means the hounds aren’t pursuing them. 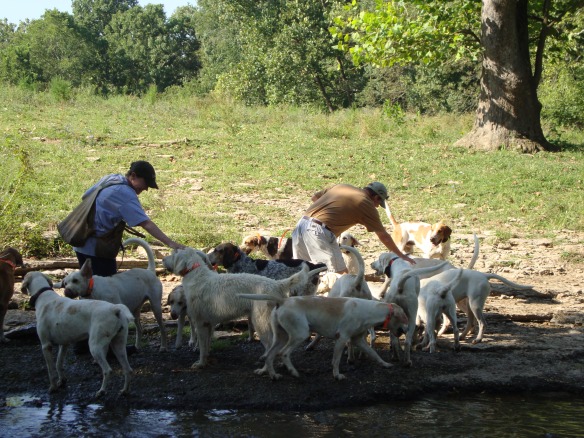 Pats all around from huntsman Lilla Mason and kennel manager Michael Edwards as the group pauses at Cormac's Elbow.

This seems a good time to get an update on Driver, whose first hound walk we remember so vividly! How has he progressed since June? There have been some surprises about this pupposaurus, Lilla tells us.

“He’s doing well, but he’s gotten shy a couple of times,” she explained. “One time we had to walk by some work trucks, and he was shy about that. I hope that was just because he was exposed to a new thing where he normally walks and that the shyness is something he’ll get over. But it’s something for the whips to keep in the back of their minds when we start hunting, to make sure nothing happens to make him scared or that, if he gets scared, he doesn’t get left behind, or something like that.

“That’s what the summer is for, to file away little personality traits or issues that might surface later and cause a problem,” she added.

This hound walk also marked the return of two much-loved English characters, Samson and Barman. Both haven been off in recent months due to health issues. Samson, whom you probably will remember very well as the opinionated traveler, had a tumor removed from his right hind leg back in February and looks to be back in good form. No doubt he’ll be glad to get back to hunting! Last season, despite his imperious style at the airport, Samson turned out to be a surprisingly laid-back hound who also helped another import, Strawberry, figure out the new surroundings shortly after their arrival from England. 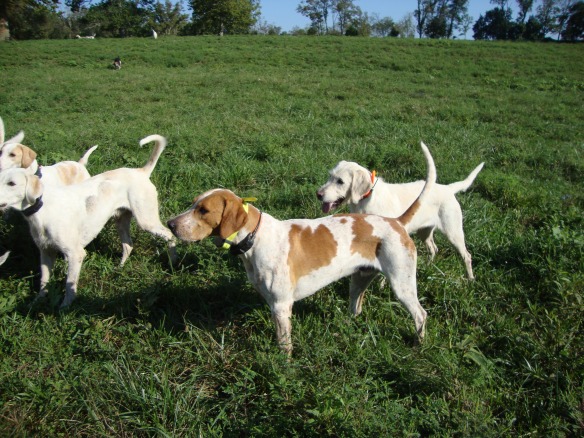 Barman was taken out of the hunting pack after having a seizure and is now doing very well on the anti-seizure medication phenobarbital. Fortunately, both phenobarbital and potassium bromide–the two treatments of choice for seizures in dogs–are both highly effective and relatively inexpensive. 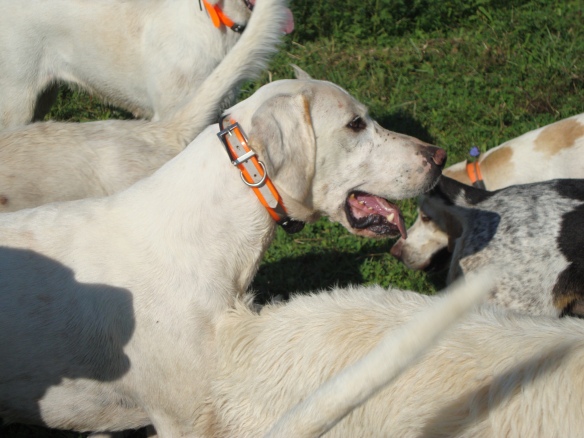 Barman, one of the kennel's Big Men on Campus.

Phenobarbital is something the houndbloggers know a little bit about, thanks to our late king of the household and his successor, Felix and Harry. Felix had epilepsy, and Harry, too, has had seizures regularly; in both dogs, the seizures were controllable by one or the other medication at a very doable price.

We’re very glad to see two of our most personable hounds, Samson and Barman, back at work!

IT was hot, but it was fun. Hundreds of hounds, from horizon to horizon. If you can’t be out hunting, freezing in the sleet and gale-force winds atop Pauline’s Ridge or some other place while the hounds go singing along Boone Creek, well, if you can’t be doing that, standing in the shade of massive old trees and watching just about every kind of foxhound with every kind of coat–English woollies, American tri-colors, and black-and-tan Penn Marydels–parading by isn’t too shabby as an alternative. Especially when one of your hounds takes home a trophy, which is kind of nice!

But now, as Iroquois huntsman Lilla Mason put it, the fun really begins: summer hound walk. That starts in just a few days, and the houndbloggers are especially looking forward to it. Paper, the clown of last year’s puppy crop, is now a hunting veteran, and it’s time for Driver and the BA litter to start walking out with some of the big pack. We’ll be following their adventures!

Some of the Iroquois hounds practicing for the May 30 Virginia Hound Show.

THEN we’ve got a Smilebox for you! Today was the final weekend training session before the hounds head to Morven Park in Leesburg, Virginia, for the Virginia Hound Show. On Saturday morning, this practice session drew a lot of volunteers, and joint-Master Jerry Miller took the opportunity to talk about hound conformation and showmanship. Joint-Master Dr. Jack van Nagell, who will be judging in the American ring at the Virginia Hound Show, also attended and commented on our hounds and their progress.

But instead of focusing on technicalities today, we thought you might enjoy a little Smilebox slide show featuring some of our favorite pictures of both young and older hounds and some of the great volunteers who have been working with them since last fall and winter. After all, this is why we love these hounds. They’re beautiful, personable, and fun. Especially the woollies. Especially the really, really big woollies. Not that I’m biased. So, as the song says, if you’re ever feeling down, just play this again and look into those wonderful bright eyes … and why not thank them for the joy they bring by making a tax-deductible donation to the Hound Welfare Fund?

Good luck at Virginia, everyone! We’re pulling for you!