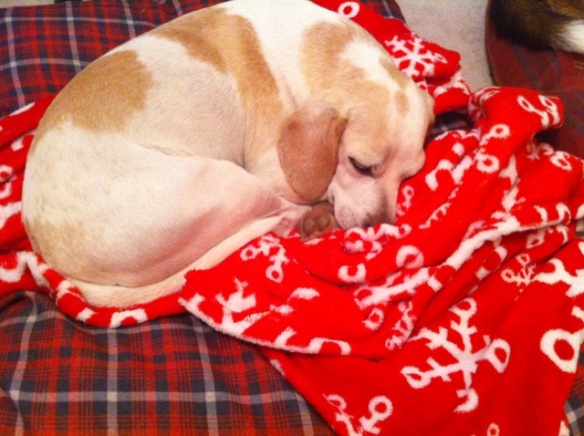 An occasional series in which we offer a pleasant “good night” to our readers, courtesy of hunting literature. Sweet dreams!

TONIGHT’S Bedtime Story is an unusual one. Chances are, you haven’t heard of John and Dorothy Kirk. We hadn’t either, until the afternoon we walked into d’Arcy Books in Devizes, England. Slipped between the hardback hunting books, we spotted a sunny yellow spine, about the color of a nice autumn squash. It was only about a quarter of an inch wide and made of heavy construction paper. When I pulled the book out of its slot on the shelf, I found it was a lovely, brief series of reminiscences that evidently meant so much to their authors that they had them privately printed by Hyssett & Son, Limited, of Weston-super-Mare, in 1975.

I gather from the preface that the Kirks are a married couple who grew up walking puppies for Mr. Tiarks’s Foxhounds (Dorothy) and the Holderness (John) but then were away from hunting while serving in the Royal Air Force. In retirement, John took on the role of Acting Master at the Weston and Banwell Harriers, and their shared experience with these hounds prompted them to start writing things down. I’m so glad they did! In the preface, Dorothy Kirk wrote, “The kindly comments of friends have encouraged me to believe that there is tremendous interest but astonishing lack of knowledge displayed about the professional skill and arduous work required to put a Pack of Hounds into the hunting field; all sorts of erroneous beliefs being held even by country folk, for of such stock was the Mother who recently was heard explaining the distant hunting scene to her daughter–‘No, dear, there has not been an accident. I think the funny little man in green blowing a trumpet has lost all his dogs’!!”

As someone who abhors the trend of Random capitalization that You sometimes See these Days (excepting, of course, the Pooh-style usage that can be fun), I nonetheless was really delighted to see that Dorothy Kirk capitalized Pack of Hounds and in doing so put them on a par with Mother!

And now, without further ado, the Kirks:

“Towards the end of November the Meet was at Cullum Green, Kewstoke, and we moved off in the general direction of Ebdon. Most of the Field experienced difficulty in crossing the wide ditches that hereabouts in Spring and Summer are attractively edged with a thick embroidery of purple flowering reeds and willow herb but which are now ‘blind,’ full of stiff stark stems and rotting leaves which effectively obscure the opposite bank.

“We were drawing the hedgerows for Foxes, but numerous hares were getting up in front of the hounds in every field, frustrating every effort of the Whips to keep them under control, and eventually leading us astray on to the land of a farmer who not only had a rooted objection to Hunting but also unfortunately was there in person, ready and willing to give his pent-up feelings full expression.

“Hounds were collected and hacked the long lonely road past Woodspring Priory of faraway History on to the top of Middle Hope ridge, the gorse-covered back of which reaches down to that bleak shore where the mouth of the Severn pours its muddy waters into the Bristol Channel.

“Half a gale was blowing across the Severn, bringing a strong smell of seaweed and the tingling lash of salty spray and rain on our faces. Thank goodness hounds spoke almost at once to a Fox in the gorse. As luck would have it, there were three of them afoot, but one was pushed down on to the lonely fore-shore and the hounds went with him.

“Now those watchers on the cliff who had the courage and stamina to face the elements were rewarded by a quite spectacular piece of hound-hunting. The Pack, full of music and undaunted by the frightful weather, stuck to their line among the seaweed and the rocks, slipping and sliding right to the water’s edge and so, for half a mile through silt and shingle, till their quarry swung up on to Middle Hope once more.

“Here, on the short, springy turf, the scent burning and with a wild crash of tongue, the hounds tore away, leaving a near frantic Field held in check by an iron gate which had been ‘locked’ against summer visitors by a pile of large boulders. Once through this obstacle, a glorious heart-warming mile-long gallop set the blood flowing through our frozen features; then another check whilst a second locked, spiked iron gate was removed from its hinges–then at last up with the hounds again on the very tip of Sand Point where our horses had great difficulty in keeping a foot-hold on the steep, narrow ridge.

“Here, in almost unrestricted possession, rabbits caused an additional hazard. We had not seem so many humble coneys for many a year; their little cotton tails bobbing in the bitter wind as they scurried away and dived into thick cover, distracting the attention of the younger hounds.

“It was all too evident that the hounds had lost this wily old Fox, and no wonder: for the wind was now so strong that it seemed to blow the notes from the huntsman’s horn straight back into his face. There was nothing to do but collect hounds and call it a day.

“As we slowly returned towards our trailers and boxes, taking an occasional warming companionable pull at each other’s pocket flask, we were greeted with fresh proof that the ‘looker on sees more of the game,’ for Mr. Leonard Parsons and Gordon, who had remained on the vantage point of Middle Hope ridge, were happy to inform us that they had watched an unhurried ‘Charley,’ quite satisfied that he had outwitted the hunt, make a leisurely return journey along the sheltered side of the ridge, into the self-same patch of gorse from which we had so rudely chased him an hour or so before.”