Banker arrives Thursday at the Atlanta airport with a houndblogger to meet Alan Foy. 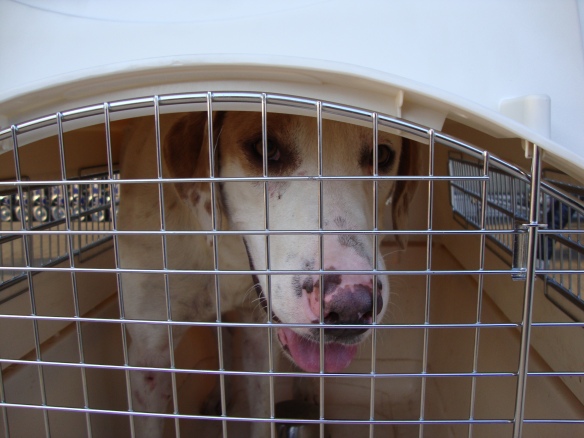 Banker hitched a ride home with us–who could say no to that face?–and will join the Iroquois hunting pack this season.

Accompanying hounds by air isn’t that difficult, although it can have some tribulations (see Samson). Fortunately, Banker was an excellent and relaxed traveler, because we did face some delays on the London end. The North Cotswold’s contact, Freddie, dropped him off at about 6 a.m. at our hotel adjacent to the airport. 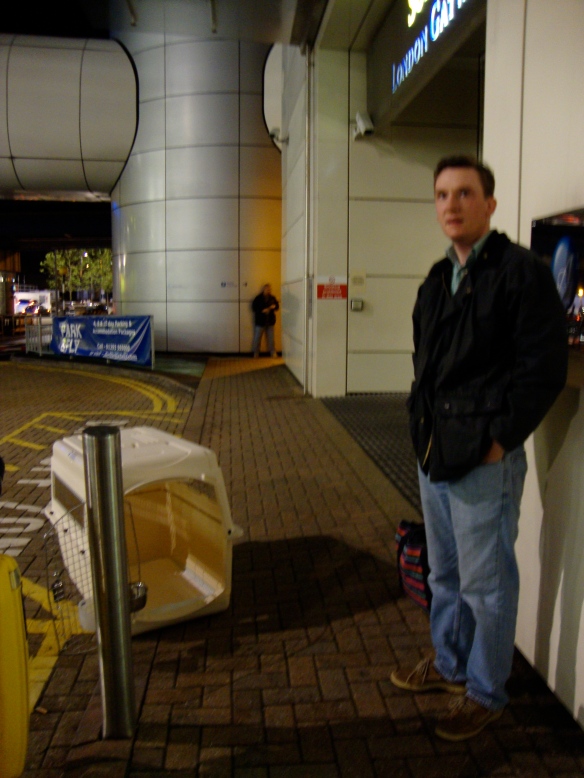 A houndblogger awaiting Banker's arrival at the Gatwick hotel

Luckily, most of the airline officials we’ve dealt with when transporting hounds have been very helpful, and we’re fortunate, too, in having good contacts in England to help with any supplies we need to bring a hound over. The night before we travel, we scope out our route through the airport and where we’ll park the hound and crate while checking in, all of which helps the process run more efficiently for the hound. What we can’t anticipate, though, are the vagaries of air travel that everyone has to put up with: delays and cancellations.

Last week, everything appeared to be running like clockwork. But then … a flight cancellation had us cooling our jets, so to speak, in the airport. There was nothing for it but to wait. Banker, having spent some time watching all the legs bustle around his crate in the terminal, just curled up and went to sleep. Good dog! 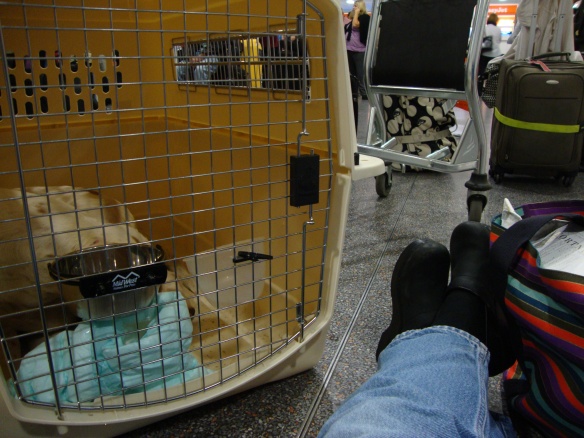 When we finally did get him (and ourselves) loaded on the plane, it was an uneventful–though long–flight to Atlanta, where Alan Foy met us with the hound truck. Banker’s journey wasn’t over, and neither was ours. From Atlanta, it was a six-hour drive back to Lexington. 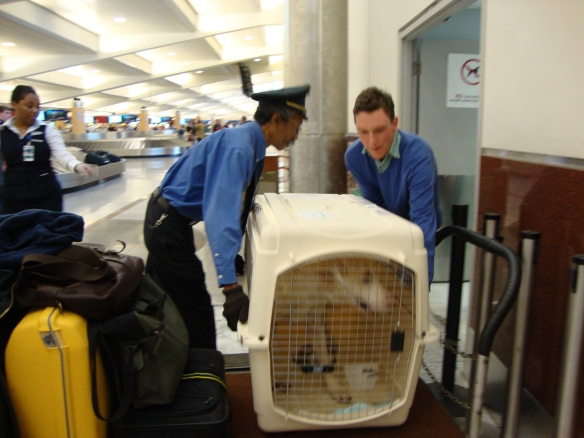 Banker gets a lift at the Atlanta airport

Laid-back Banker didn’t mind a bit. He got some dinner and a bucket of fresh water, and he rode in style in the back of the enormous hound truck, whose bed area has been converted into a large hound box. It’s bedded with lots of warm, dry straw, and Samson happily snoozed, waking up to eat and wag his tail when we made stops.

So now we’ll have a Banker and a Banknote (she’s one of the BA litter that will be joining the working pack for the first time this season). Now, as one of the houndbloggers quipped on a punch-drunk drive home from Atlanta, all we need is a hound named Bailout!

Once back in Lexington, the houndbloggers HAD to check out the World Equestrian Games. This world championship event takes place every four years and attracts horses and riders from all over the world; this year, it’s being held in North America for the first time. Saturday, Oct. 2, was the cross-country eventing day. We’re big fans of former racehorse, now three-day eventing star Courageous Comet and his rider Becky Holder, and getting to see him compete at WEG was a draw in itself (and we were crushed to learn this morning that, after throwing a shoe early on the cross-country course, third-placed Courageous Comet was withdrawn after Sunday morning’s jog in advance of that day’s stadium jumping competition, the final and deciding part of the eventing competition; to see his outstanding cross-country run, even minus the shoe, click here). So we trooped out to the Kentucky Horse Park. We’re glad we did. We cheered for Courageous Comet at what Rolex Three-Day Event-goers will know as the Head of the Lake, temporarily named the Land Between the Lakes for WEG. This multi-fence obstacle is probably the prettiest one on the cross-country course, and it drew the biggest crowd. 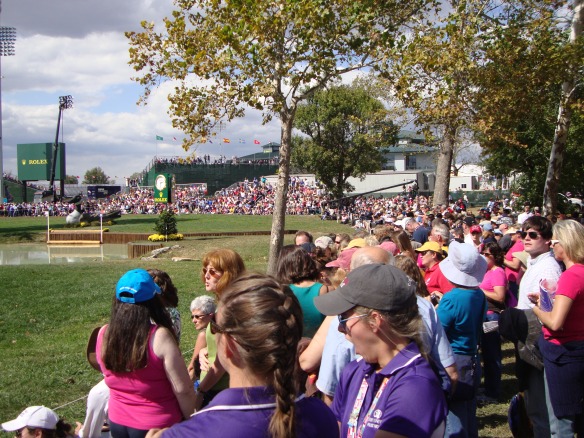 The crowd at WEG's Land Between the Lakes, fence 17.

A competitor gallops out of the Land Between the Lakes combination.

Personally, we love this fence. But there are 27 others! We toodled around here and there …

Some of the cross-country jumps were whimsical, like the Fallen Dueling Tree, which included a squirrel, snail, and acorn. The horses jumped between the snail and the acorn:

Not every horse on the grounds was competing in the cross-country event. We saw police horses on the job … 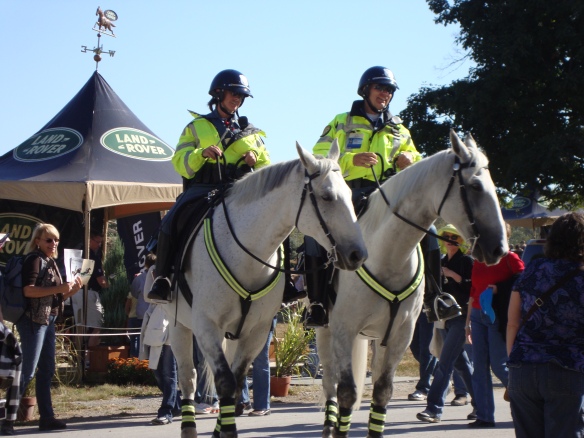 … and some of the showjumpers warming up on the flat for the coming week’s competition. 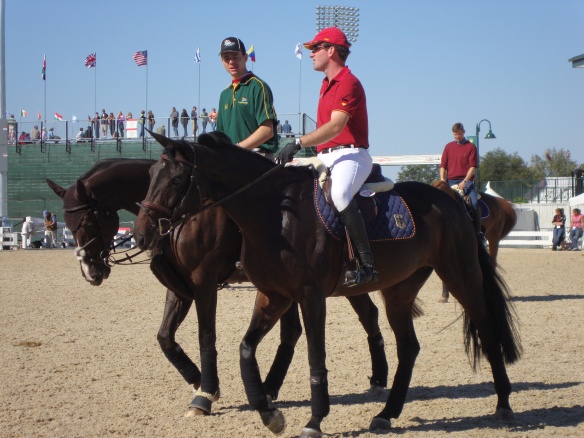 Some equine athletes weren’t present, but they were there in spirit:

And some of the vehicles weren’t even horses at all. One of our favorites was a golf cart sporting the British flag and a helpful reminder to the driver on the dashboard:

Mexican supporters were a little less understated in showing their national colors via golf cart:

There’s even more to do at the World Equestrian Games than watch the competitions. The Equine Village and trade fair feature many exhibitions, demonstrations, and opportunities to shed some cash. Walking through the various displays, we came upon a few unusual and unexpected sights. 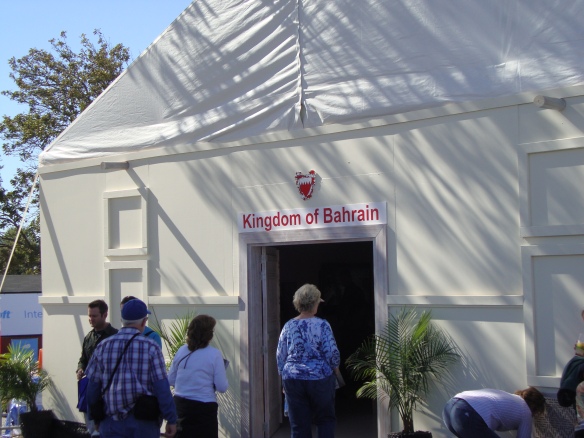 Who knew the Kingdom of Bahrain was so small and portable?

This French fan had a hairy take on the day's events. How did we know he was French?

Many fans brought out their flags …

And a few, like these Dutch fans, went a little farther:

If all the colorful crowds were too much for you, how about a drink?

Speaking of dietary staples, there were also these frozen ice cream balls. Officially, they were called Dippin’ Dots, but I like Mr. Houndblogger’s name for them: Weird in a Cup. 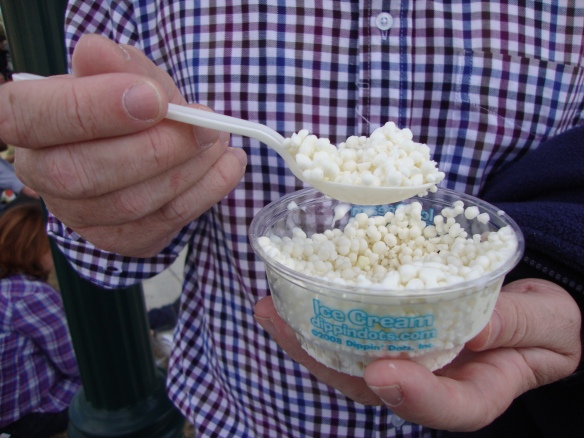 For the record, the houndbloggers don’t recommend them.

While we were out on the cross-country course, the jump crew was putting up the fences for Sunday’s stadium jumping, the final part of the three-day competition. Ever wonder what a baby jump looks like before it grows into a full-sized stadium obstacle? Pretty much like this:

The thing we missed most of all? Dogs. Due to veterinary restrictions, dogs are banned from attending WEG. As we walked around the cross-country course, we noted how strange it seemed to be at the Kentucky Horse Park and not see dogs. They’re a regular feature, and in fact one of our favorite parts, of the Rolex event. But we did see this guy. I think he thought he was going to be attending the Warthog Eventing Games, poor fellow. 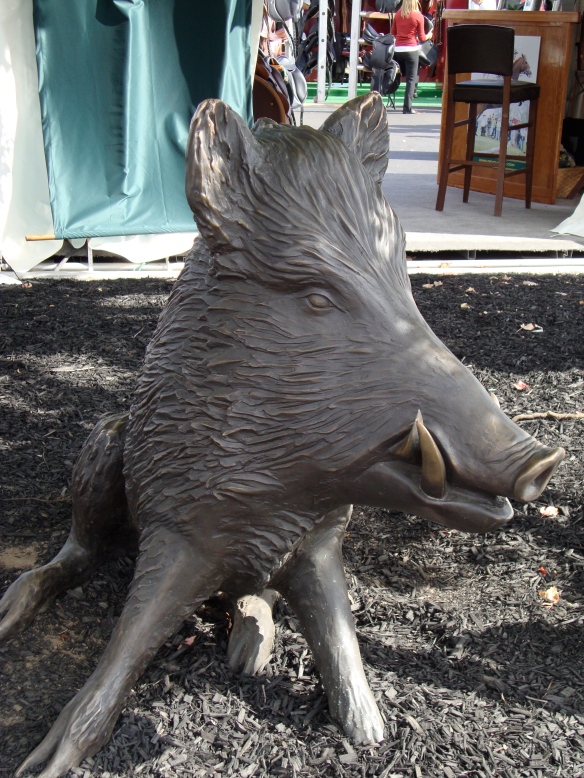 At least it looked like he was having fun, anyway!

6 thoughts on “A flying Banker and Big Doings in Lexington”